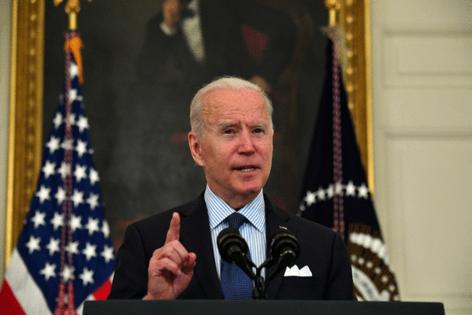 WASHINGTON — Confronting concerns that too many Americans aren’t getting vaccinated, President Joe Biden said Tuesday that his administration was beginning a “new phase” of its COVID-19 inoculation campaign to convince more people to get a shot, and to make it easier for them to do so.

At stake is his promise to curb a contagion that has taken nearly 600,000 lives and cost millions of jobs in the U.S. — and make it safer for people to gather for Fourth of July barbecues, a symbolic goal Biden set a little more than a month after taking office.

With his remarks, Biden made official an ongoing shift in his administration’s focus from a logistical challenge to produce and distribute enough vaccines to a public education campaign to convince more Americans that it’s safe and important to get inoculated. To the consternation of health experts, the average number of shots administered daily has dropped by roughly one-third in the last three weeks, from 3.4 million to 2.3 million, according to statistics compiled by Bloomberg.

“We have enough vaccines,” Biden said. “Now that we have the vaccine supply, we’re focused on convincing even more Americans to show up and get the vaccine that is available to them.”

Biden said his administration was laboring to make it easier to get shots, unveiling a new federal website, vaccines.gov, to help people make appointments and directing pharmacies to allow walk-ins. Mass vaccination sites are being closed in favor of smaller clinics, doctor’s offices and mobile operations, part of what the president described as a “more granular” effort. He’s already urged employers to give workers paid time off to get vaccinated, with the federal government picking up the tab.

“There are millions of Americans who just need a little bit of encouragement to get the shot,” he said.

The president downplayed the slower pace of vaccinations, saying it was expected once the country had inoculated the most vulnerable and the most eager. More than two-thirds of Americans who are at least 65 years old are fully vaccinated, and more than half of adults have gotten at least one dose. The Pfizer and Moderna vaccines, which are the most commonly administered, require two shots.

But the struggle to break through many Americans’ vaccination hesitancy is apparent in the less ambitious target that Biden announced. He called for 70% of adults to receive at least one dose by July 4, and for 160 million adults to be fully vaccinated by that point.

To reach that goal, he wants an additional 100 million shots in arms in the next 60 days, a reduced pace after 220 million shots were administered in Biden’s first 100 days in office.