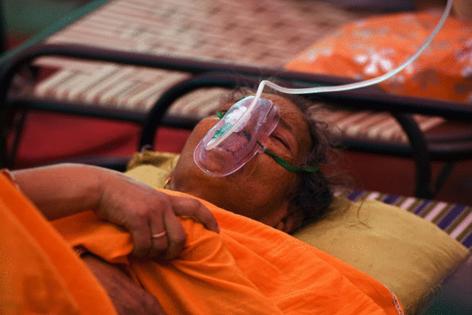 The coronavirus wave that plunged India into the world’s biggest health crisis has the potential to worsen in the coming weeks, with some research models projecting that the death toll could more than double from current levels.

A team at the Indian Institute of Science in Bangalore used a mathematical model to predict about 404,000 deaths will occur by June 11 if current trends continue. A model from the Institute for Health Metrics and Evaluation at the University of Washington forecast 1,018,879 deaths by the end of July.

While coronavirus cases can be hard to predict, particularly in a sprawling nation like India, the forecasts reflect the urgent need for India to step up public health measures like testing and social distancing. Even if the worst estimates are avoided, India could suffer the world’s biggest COVID-19 death toll. The U.S currently has the largest number of fatalities at around 578,000.

India added 357,229 new cases on Tuesday, taking its total outbreak past 20 million infections and overall death toll to 222,408. In recent weeks, the scenes on the ground, with long lines outside crematoriums and hospitals turning away ambulances, have painted a picture of a nation overwhelmed by the crisis.

“The next four to six weeks are going to be very, very difficult for India,” said Ashish Jha, the dean of Brown University School of Public Health. “The challenge is going to be to do things now that will make sure it is four weeks, not six or eight, and that we minimize how bad things will get. But in no way is India anywhere near out of the woods.”

A spokesperson for the health ministry couldn’t immediately be reached. The ministry said on Monday that in about a dozen states, including Delhi, Chhattisgarh and Maharashtra, there are early signs that the number of daily new infections are starting to plateau.

A prolonged crisis has the potential to dent the popularity of Prime Minister Narendra Modi as well as slow or reverse India’s recovery from last year’s economic recession. Bloomberg Economics lowered its growth projection for the year ending March 2022 to 10.7% from 12.6%, and even these numbers are flattered by a low base as activity ground to a halt due to a strict lockdown last year.

For public health researchers, a key concern is the relative dearth of coronavirus testing, which many scientists believe is causing a sharp undercounting of cases.

“It could honestly get a lot worse, which is hard to imagine given how staggering the impacts have already been when you see 400,000 new cases each day and you know that that’s probably an underestimation,” said Jennifer Nuzzo, a senior scholar at the Johns Hopkins Center for Health Security in Baltimore, Maryland.