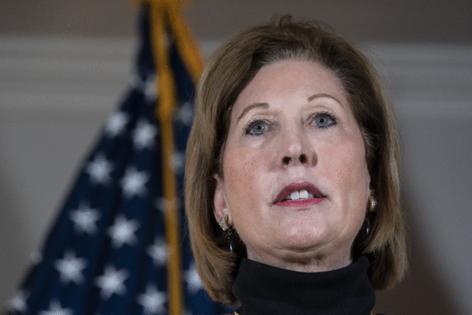 Powell repeatedly and falsely claimed in public that she had proof Dominion rigged the 2020 election against Donald Trump, saying she could “hardly wait to put forth all the evidence” and that “you would have to be a damn fool” not to believe it, Dominion said in a filing late Monday against Powell’s request to dismiss the lawsuit.

“Powell did not even attempt to couch her accusations as opinions,” Dominion said in the filing in Washington federal court. “She leveled the falsehoods as deadly serious assertions of fact backed by evidence that she claimed would prove that Dominion had in fact stolen the 2020 election.”

Powell’s conspiracy theory and other disinformation preceded a deadly insurrection at the Capitol on Jan. 6 by a mob of Trump supporters, and Trump continues to claim the election was stolen, even though his own attorney general said he hadn’t found evidence of fraud that would have affected the result. Letting Powell off the hook for her statements now would effectively create a “propaganda exception” for defamation liability, the company said.

Denver-based Dominion is fighting to keep a series of related lawsuits it filed on track for potential trials where the company says it will prove that the debunked conspiracy accepted in one form or another by millions of Republican voters is false. Trump attorney Rudy Giuliani, MyPillow Inc. Chief Executive Officer Mike Lindell and Fox News are fighting to dismiss the suits against them.

Powell in March said the suit against her should be tossed out because “no reasonable person” would believe her claims about Dominion were “truly statements of fact.” She said her claims were clearly understood to be merely “opinions and legal theories” that are protected from defamation suits.

She has nevertheless said she stands by her theory, which was repeatedly rejected by judges who threw out lawsuits brought to reverse the election. The Texas-based lawyer has claimed she has a video of Dominion’s founder admitting he can flip a million votes, as well as evidence that the company paid kickbacks and was “created in Venezuela to rig elections” for former president Hugo Chavez.

“After lying about the evidence supporting her claims, Powell now asks this court to create unprecedented immunity for attorneys to wage televised disinformation campaigns,” Dominion said.

“A law license is not a license to lie,” it said.