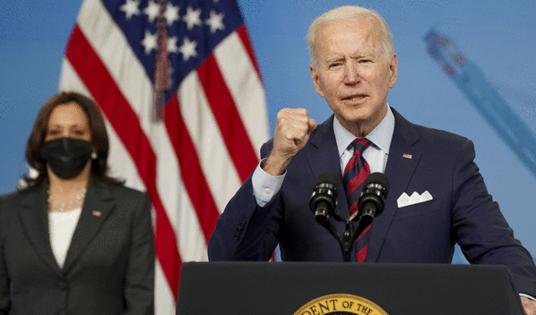 WASHINGTON — President Joe Biden, making his first foray into efforts to control gun violence since taking office, plans to announce Thursday an effort to limit so-called ghost guns — weapons sold without serial numbers or other identifying information — and to nominate a figure from a major gun control group as director of the federal agency that regulates firearms.

The executive actions come after two recent massacres and as some activists in anti-violence groups have expressed disappointment with the administration for putting gun regulation behind other priorities, including the COVID-19 relief bill and Biden’s recently announced $2-trillion infrastructure proposal.

The administration’s moves, which Biden plans to announce at an event with Atty. Gen. Merrick Garland, are relatively limited in scope, but mark a sharp shift in course from the Trump administration, which consistently deferred to the National Rifle Association and other gun rights groups and opposed measures to expand gun regulation.

A senior Biden administration official who briefed reporters on Wednesday noted that the moves are “an initial set of actions the administration is taking to address gun violence” and that further steps could come later. The official spoke under the condition that they not be identified by name.

The most concrete of Biden’s proposals will be new federal rules aimed at ghost guns, made from kits that purchasers can assemble into weapons with relative ease and a few basic tools. The kits are not classified as firearms, which means a person can buy them without a background check and they can be sold without the identification stamps required for guns.

The sales of such kits have grown rapidly in recent years, and ghost guns have increasingly been showing up at crime scenes. Law enforcement officials in California have estimated that roughly 3 in 10 guns recovered from crimes in the state are ghost weapons. In February, Los Angeles City Attorney Mike Feuer filed a lawsuit against a Nevada-based seller of such kits, saying that “untraceable ghost guns are the emerging weapon of choice for criminals” in Los Angeles and other major cities.

Under Biden’s plan, the Justice Department will propose a new rule within 30 days that would require background checks for purchases of ghost guns, according to the senior administration official. The rule will likely involve reclassifying the kits as firearms under federal law.

Because the proposal will require new federal regulations, however, it will have to go through a lengthy period of public comment before it can fully take effect, meaning the new restrictions probably won’t limit sales until late this year at the soonest.

The administration will also step up funding of efforts to reduce urban gun violence, which has jumped in several cities over the last year.

Biden has proposed $5 billion over the next eight years for “community violence interventions,” a term that covers a range of programs designed to deter violence using tools other than putting people in prison. These measures can include conflict intervention, connecting people with social service agencies and working with shooting victims while they are hospitalized in hopes of avoiding retaliatory attacks.