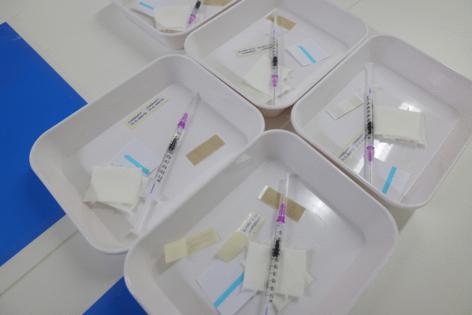 Stéphane Bancel, the chief executive of drug company Moderna, could barely restrain his pride in issuing his annual letter to shareholders on Jan. 3.

"Since the beginning, it has been our mission to deliver on the promise of mRNA technology for patients," Bancel wrote, referring to the vaccines in the company's product pipeline that use short pieces of genetic code to help cells build immunity.

"And we delivered at speed with our mRNA vaccine against COVID-19," he continued. "As our first approved product, it has impacted hundreds of millions of lives around the world. ... We are harnessing the power of mRNA to create a new category of medicines and a company that maximizes its impact on human health."

A couple of pertinent points were missing from Bancel's 2,700 words of self-congratulation. One was the contribution of the federal government to the company's success.

That included a research grant of almost $1 billion from the government's Biomedical Advanced Research and Development Authority, or BARDA, through 2020, plus a $1.5-billion federal purchase guarantee in 2020 for COVID vaccines before testing was even completed — a deal that materially reduced Moderna's financial risks in developing the vaccine.

Nor does that count the millions, possibly billions, in federally-funded basic research at academic institutions and government laboratories in mRNA technology— the foundation of the product developed by Moderna.

Also glossed over was Moderna's intention to raise the price of its COVID vaccine from the estimated $20.69 per dose paid by the federal government through December 2022 for 1.2 billion doses of COVID vaccines, including Moderna's product and a similar mRNA formulation produced by Pfizer, to as much as $130 per dose.

Pfizer, which did not receive federal research funding but did obtain a government purchase guarantee, has also announced a price increase to as much as $130 per dose.

Pfizer's vaccine also derives from basic government-funded research; indeed, on its website the company acknowledges the foundational work on mRNA technology by Katalin Karikó and Drew Weissman of the University of Pennsylvania, research that was funded in part by the National Institutes of Health.

Both companies have justified the planned price hikes in part by citing the savings in healthcare costs the vaccines have produced.