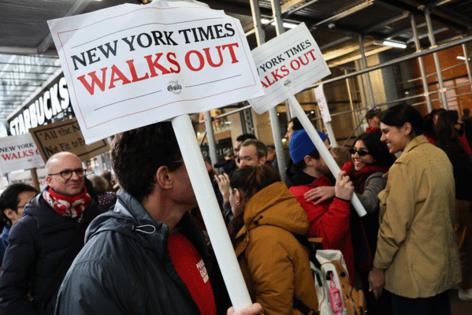 The New York Times Guild’s 24-hour strike highlighted the mounting frustration of writers, editors, online producers, security guards and other staffers over the slow pace of negotiations for a new contract. The last newsroom contract expired in March 2021, and guild leaders this week said “the company’s failure to bargain in good faith” prompted their walkout.

“We are deeply committed to the success of the paper. ... (But) today, for the first time in decades, we’re fulfilling that mission in a different way,” The Times Guild and its local, NewsGuild of New York, said in a letter to readers.

The Times’ management, however, disputed slow-walking a deal to cover 1,450 newsroom guild members.

Executive Editor Joseph Kahn, in a separate email to the newsroom, wrote: “Strikes typically happen when talks deadlock. That is not where we are today.”

Negotiations have been ongoing for 20 months. New York Times’ journalists have demanded a 10% pay bump at contract ratification (to compensate workers who went two years without a raise) and 5.5% increases in 2023 and 2024. They’ve asked for a minimum annual salary of $65,000, citing the high cost of living in New York.

Talks have also touched on retirement and other benefits, as well as a proposal to phase out the company’s pension plan. Some journalists also want to continue to work from home as they have throughout the COVID-19 pandemic.

Members of the Newspaper Guild of Pittsburgh are in the seventh week of a strike against the Post-Gazette. The group went on strike in early October after rejecting a new employee health insurance plan imposed by management. Journalists with the Fort Worth Star-Telegram in Texas, part of a chain owned by hedge fund Chatham Asset Management, went on strike last month.