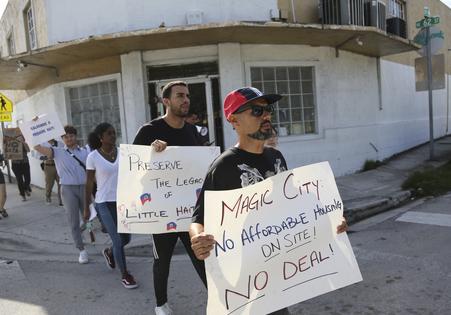 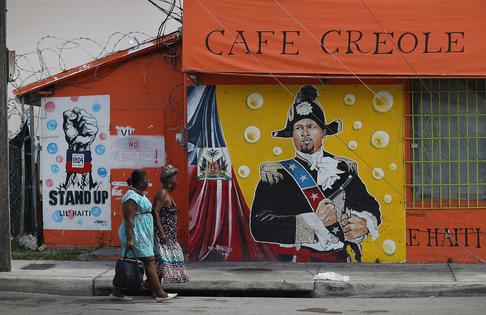 Miami’s Little Haiti has been an immigrant community for decades. Its streets are lined with small homes and colorful shops that cater to the neighborhood, a predominantly Afro-Caribbean population with a median household income well below Miami’s.

But Little Haiti’s character may be changing.

The developers emphasize their commitment to sustainability. But high-end real estate investments like this raise property values, pushing up property taxes and the cost of living for surrounding neighborhoods.

The potential effect on shops and homeowners and on the culture of the community has stoked controversy and protests. Nearby strip malls have been bought up for new development, leaving long-time businesses with fewer affordable options. Other big developments are now being planned.

It’s the idea that investors and homebuyers are changing their behavior and moving from coastal areas into poorer, higher-elevation neighborhoods like Little Haiti, which sits on a ridge less than a mile from the bay, in anticipation of worsening climate change risks, such as sea-level rise. Miami is often held up as an example.

But are Miami’s investors and homebuyers really motivated by climate change?

The story goes that Miami homebuyers are abandoning the coasts – where high tides can already bring street flooding in some areas – and are looking for higher-elevation areas because they want to escape climate change.

That isn’t what we’re finding, though.

Gov. Gavin Newsom on Monday jumped into the debate over the spike in natural gas prices affecting millions of California utility customers, calling on federal regulators to look at whether gouging or market manipulation is...Read More