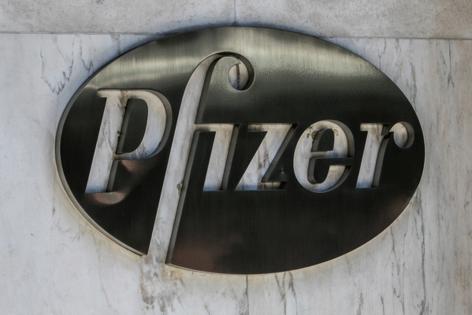 A Pfizer executive announced the investment Monday morning at a news conference with Gov. Gretchen Whitmer and other state officials.

The $750 million in new investment from Pfizer is on top of the $465 million the company started investing last December when it broke ground on expanded facilities in Portage, said David Breen, vice president and site leader for Pfizer's Portage manufacturing facility near Kalamazoo.

The MAP effort makes it possible for the company to distribute pre-filled syringes of medication, making them easier to use and increasing patient access, Breen said. That effort includes "technologically-advanced," self-contained, aseptic modular systems and design.

"This expansion of the MAP program is part of our blueprint to grow our U.S. manufacturing base in Kalamazoo and continue operating the largest global manufacturing network and most sophisticated supply chain in innovative biopharma," Breen said.

Some of the first doses of the COVID-19 vaccine were produced at Pfizer's 1,300-acre facility in Portage.

At Monday's press conference in the governor's office, Whitmer said it could be the "third miracle" from the company, citing Pfizer's production and distribution of the COVID-19 vaccine during the pandemic as the first and second "miracles."

"We are getting this game-changing expansion over the finish line," Whitmer said.

Quentin Messer Jr., president and CEO of the Michigan Economic Development Corporation, said the project would not be receiving incentive funding from the state's year-old job-creation fund, known as the Strategic Outreach and Attraction Reserve fund. But he said there was other aid the project would be eligible for.

"You never bet against a state that knows how to make things," Messer said.

Messer did not specify what incentives Pfizer will receive for expanding the footprint of its Portage facility and adding jobs.

Breen said the Portage facility currently employs around 3,000 workers and is looking to fill about another 300 roles for other projects. He expects the opening under the additional expansion will require hires such as scientists, process engineers, operators, technicians and construction workers.

In June, Pfizer announced a planned $120 million investment in its Kalamazoo County facility that it estimated would create about 250 additional jobs and would support its production of the COVID-19 oral treatment Paxlovid. Whitmer joined the company for the announcement.