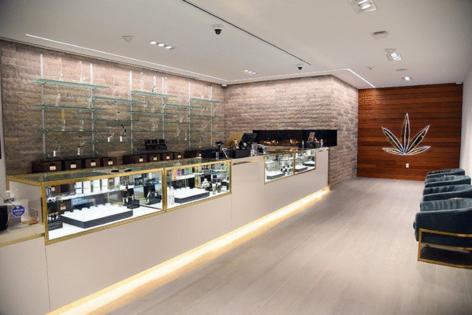 Marijuana shops across the US are rushing to find alternative ways for customers to pay after networks that supported a popular workaround to the banking system began to shut down last week.

Cashless ATMs, also called “point of banking” systems, allowed cannabis buyers to use a bank card instead of cash. The method had evolved to get around the fact that credit-card companies and banks don’t want to be involved in marijuana transactions because the drug is federally illegal.

But such technology made pot purchases look like ATM withdrawals coming from different addresses, such as a neighboring McDonald’s, as Bloomberg reported in April. At that time, such transactions looked likely to move about $7 billion past the usual money-laundering controls of the banking system this year — or about a quarter of all US cannabis sales.

Now the system is faltering because some of the largest processors of ATM transactions, such as NCR Corp.’s Columbus Data Services, have turned off the ability of processors to use their service, according to three people familiar with the issue, who asked not to be named discussing private information. NCR declined to comment.

Small dispensaries in Arizona, California and Massachusetts have all experienced outages, according to employees who were recommending that customers use cash. Large dispensary chains of multistate operators were also said to be affected.

Curaleaf Holdings Inc., which had said last April that it processes around a third of its transactions through cashless ATMs, was telling customers at some locations that it was unable to accept bank cards. Curaleaf declined to comment.

It’s an important time for the cannabis industry, where stocks have fallen sharply in the past year over a lack of political momentum and ongoing concerns about competition from the black market and questions about the health risks of THC. The industry has been hoping that this month, the legislation known as SAFE Banking could pass, giving it more access to the banking system.

“This is a pivotal point in cannabis banking,” Ryan Hamlin, chief executive officer of payment-technology provider Posabit Systems Corp., said of the shutdowns. There were signs of the networks going down at the end of November, but the outages intensified by late last week, he said, estimating that by the end of the weekend only about a fifth of the cannabis industry could use cashless-ATM-style payments.

Posabit, based in Kirkland, Washington, had been migrating away from such transactions to a different form of payment processing for more than a year, and finally got rid of the last of its cashless-ATM solutions on Sunday, Hamlin said.