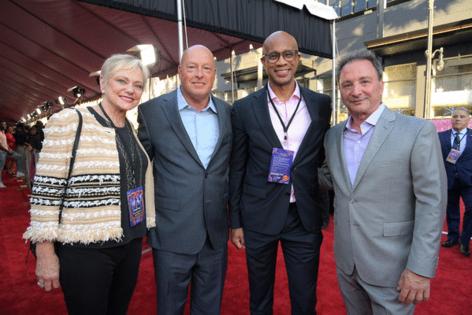 For more than a decade, Kareem Daniel faithfully followed the Walt Disney Co. script for success.

The 48-year-old executive had a Stanford MBA. He started as an intern and held key leadership roles with divisions including the Imagineers, the vaunted designers of theme park rides. He was a movie buff and an unabashed fan of Disney properties — his favorite toy as a boy was the Millennium Falcon, the hulking spaceship from "Star Wars."

His ascent accelerated in 2020 when his mentor, Bob Chapek, became Disney's chief executive. Daniel was tapped to run consumer products, and five months later, he hurdled over more experienced executives to lead a massive new and controversial business unit.

For Disney's Black employees, Daniel's rise was a point of pride. His promotion came after a summer of protests over the murder of George Floyd in Minneapolis, and media companies were under the microscope for their lack of diversity in the C-suite.

"There was an African American male at the top — that was huge," said a former Disney executive who wasn't authorized to speak publicly. "It seemed that he was suddenly in the succession line."

He was the czar in charge of $30 billion a year in program spending, deciding release strategies for Disney's movies and TV shows, steering them to streaming services, Disney+, ESPN+ or Hulu, theaters or one of the company's TV channels.

That changed last month, when Disney's board of directors abruptly fired Chapek and brought back the Burbank giant's respected former chief executive Bob Iger, less than a year after he had said goodbye. Iger's first act was to announce a review of Daniel's division — Disney Media & Entertainment Distribution, known as DMED — and show Daniel the door.

Disney insiders cheered the dismantling of the maligned DMED (pronounced Dee-med). The move promised to unwind what many said was one of Chapek's biggest mistakes in his nearly three years as Disney's CEO. Daniel and Chapek had designed a structure that was meant to streamline decision-making to boost Disney's portfolio of direct-to-consumer apps — which, at the time, were in vogue on Wall Street. Financial executives, not those who developed the programming, were in the driver's seat.

But the arrangement fostered resentment among creative executives in the film and TV studios who felt their authority was slipping away.

Daniel's tenure atop DMED and subsequent ouster was a classic case of corporate politics unfolding at the world's most powerful entertainment company. It's common practice for a new regime to briskly push aside a fired CEO's closest deputies and allies, and Daniel's proximity to Chapek put him well within the blast radius. (Daniel also acted as Chapek's chief of staff in 2020 before being tapped to lead DMED.)