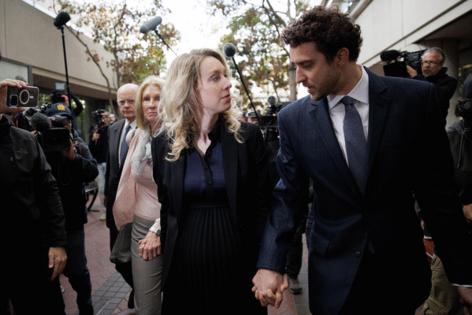 Elizabeth Holmes appealed her criminal fraud conviction, two weeks after she was ordered to serve 11 1/4 years in prison for deceiving investors in her blood-testing startup Theranos Inc.

Lawyers for Holmes, 38, filed a single-page notice of appeal late Friday in federal court in San Jose, California, without disclosing on what grounds the Theranos founder and former CEO will ask the 9th U.S. Circuit Court of Appeals to overturn the guilty verdict reached by a jury 11 months ago.

Legal experts said her appeal was widely expected and faces long odds because U.S. District Judge Edward Davila went to great lengths to be fair to both sides starting when Holmes was indicted in 2018, continuing through her four-month trial late last year and concluding with her sentencing last month.

“This sentence is bullet-proof on appeal,” said Seth Kretzer, a criminal defense lawyer not involved in the case. “The end of this long case is drawing near.”

The appeal caps a yearslong saga that has riveted Silicon Valley, inspiring books, TV documentaries, podcasts and films about the Stanford University dropout who became a celebrity entrepreneur with a $9 billion company, only to see it collapse in scandal when its technology was exposed as a failure.

A jury convicted Holmes in January of four counts of wire fraud and conspiracy after prosecutors presented evidence and witness testimony that she knew the blood-testing devices she pitched as revolutionary to venture capitalists and wealthy investors didn’t actually work.

Holmes’s ex-partner, Theranos President Ramesh “Sunny” Balwani, was tried separately and convicted in July. His sentencing is set for Wednesday.

Davila has yet to rule on Holmes’s request to remain free on bail until her appeal is decided, a process that defense lawyers said could take years. Kretzer said Davila is unlikely to grant the request, nor is the San Francisco-based appeals court.

“By playing it so straight down the middle at trial with regards to his rulings, Judge Davila has ensured that the 9th Circuit won’t grant an appeal bond after he denies that request,” he said.