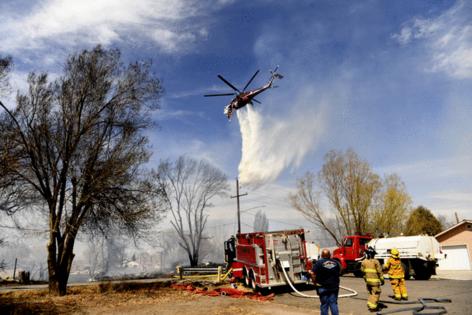 The increasing risk of wildfires in Colorado is driving insurance carriers to raise premiums on homeowners’ policies — if they decide to insure them at all — and now the state’s insurance chief is suggesting a publicly funded pool of money be established to provide property insurance for those who can’t find it in the open market.

Colorado experienced massive, destructive wildfires in the past few years, including the Marshall fire, which caused an estimated $2 billion in property damage on Dec. 30, making it the most expensive wildfire in Colorado history.

The wildfire that destroyed more than 1,000 homes in Louisville, Superior and unincorporated Boulder County exposed multiple issues in the state’s insurance industry, including an estimation that nearly two-thirds of Marshall fire homeowners were underinsured and their policies won’t provide enough money to rebuild the homes they once had.

Insurance Commissioner Michael Conway recently said that policy affordability and availability were not problems in Colorado until recent months, noting that his office has received calls from nearly 40 people in the state who could not find insurance for their properties.

“That fundamentally changed two or three months ago,” Conway said during an October public meeting. “My phone started ringing from consumers saying they were having a huge issue with availability and coverage across the state.”

Those inquiries, he went on to say, are “a drop in the bucket of what we are fairly certain is happening throughout the state.”

Now, Conway, state legislators, the insurance industry and consumers are trying to figure out what to do about it, and the clock is ticking faster than they had expected.

“The sentiment was we had more time,” said state Rep. Judy Amabile, D-Boulder, who has worked on property insurance bills in recent years. “But it’s starting to happen now and we need to get ahead of it.”

Amabile is working with the insurance commission on a solution.