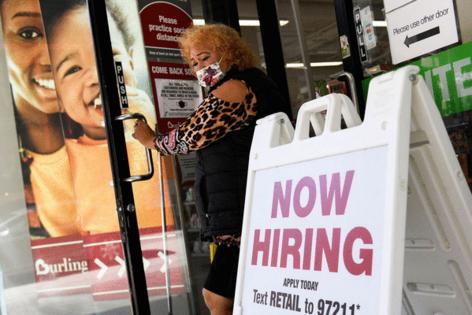 Two million Californians lost their unemployment benefits last September when four pandemic-era federal programs ended. Some workers scrambled to find jobs, just as employers had hoped. But others, who’d been trying to find steady work for months, had their safety net pulled out from under them.

“It was a lot of people who had really been trying to re-enter the workforce and just hadn’t found that steady employment yet,” said Daniela Urban, executive director of the Sacramento-based Center for Workers’ Rights. After the federal programs ended, Urban and her organization found themselves in triage mode, connecting unemployed workers with homeless prevention services and CalFresh just to meet their basic needs.

“For most of the people that we were talking to,” Urban said, “this had been the exclusive monetary support for them and their household.”.

Unemployed people were eligible to receive up to 53 weeks in jobless benefits under the federal Pandemic Emergency Unemployment Compensation (PEUC) program, created in March, 2020, as the Covid pandemic sent the economy reeling..

“Our analysis,” the report noted, “suggests the extension was disproportionately a lifeline for less-educated workers, Black workers and workers over the age of 64.”

Till von Wachter, a co-author of the study and faculty director of the California Policy Lab’s UCLA site. said, “Throughout the crisis, the most vulnerable workers have fared worse, including when you look at who was more likely to be receiving benefits under the PEUC program when it was discontinued.”

A month earlier, three of four unemployed workers in the state were receiving either regular or PEUC payments. By October, that percentage tumbled to 26%.

Yet unemployment remained above the national average, and the study suggests that in California, and in other such states, “the majority of workers who stopped receiving unemployment insurance benefits did not find jobs in the ensuing months.”

In California, Black workers made up a higher share of PEUC claimants.