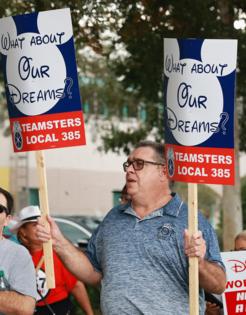 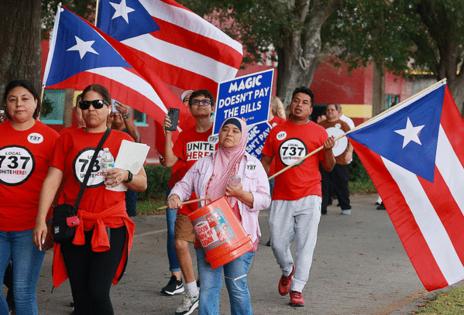 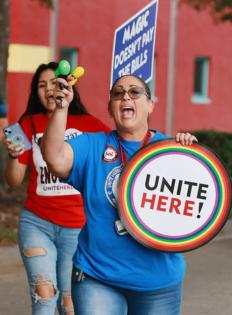 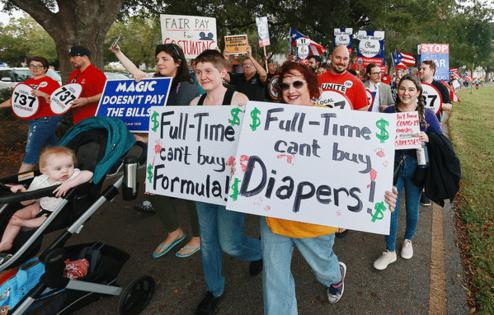 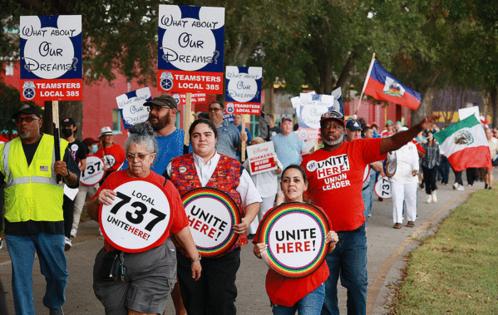 If it weren’t for the assistance of their parents, Disney World worker Amethyst Bennett said she and her husband, a Universal employee, would be unable to afford formula and diapers for their 9-month-old daughter despite both working full-time.

Bennett, 28, held a sign that read, “Full-Time Can’t Buy Formula” as she took turns pushing daughter Shealyn’s stroller during a Wednesday rally with a couple hundred other Disney workers, many still in their costumes from work, asking the company for higher pay.

“Being able to make magic and also provide for her would mean my entire life,” said Bennett, who has worked at her “dream job” as a recreation employee with Disney since 2018 and makes $16.50 an hour.

Employees began marching a couple miles off Disney property, with the mountain for Animal Kingdom roller coaster Expedition Everest visible in the distance, to a stretch of U.S. 192 in Kissimmee Wednesday afternoon. They chanted “Disney workers need a raise” and displayed signs saying, “Magic doesn’t pay the bills” and “We deserve more than [former CEO Bob] Chapek ever did!!” to locals commuting from work and tourists traveling to area restaurants and hotels.

The Service Trades Council Union and its affiliate unions represent 42,000 service workers at Disney World who have advocated for higher wages, improved health care and retirement benefits and more since the unions started renegotiating their contract with Disney on Aug. 24.

The previous agreement from 2018, which expired Oct. 1, won workers a path to a $15 minimum wage by 2021 and influenced other local hospitality companies to increase their pay.

Now, member unions are pushing for Disney to immediately raise that minimum to $18 per hour and boost the pay of workers who already make close to that amount by $3 an hour.

Supporters say Disney can afford the raises as its theme parks report a streak of record revenues amid price increases and as former top executive Chapek received a bonus in excess of $20 million earlier this year.

Disney’s theme parks have been a major contributor to the company’s revenue as it has recently struggled with significant losses in streaming. These financial losses contributed to Chapek’s ousting last week, analysts said.

“[The company is] like a pyramid. If we are not there [at the base], it would collapse,” said 28-year-old David Ramirez, who earns $15 an hour working at an Animal Kingdom attraction.