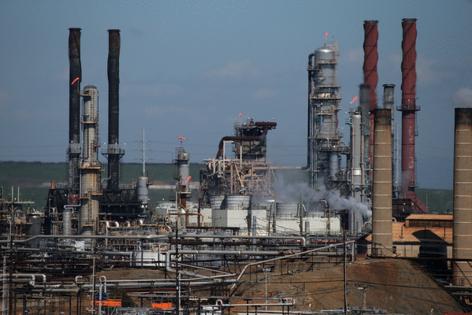 SACRAMENTO, California — Consumer advocates and oil industry representatives launched opening salvos Tuesday in a bitter debate over whether oil companies are “price gouging” drivers or are themselves actually the victim of California’s green policies squeezing out fossil fuel industries.

The California Energy Commission convened the panel of energy experts, advocates and oil industry representatives to probe a gas price spike in September that at one point ballooned to an unprecedented $2.60-price gap between what Golden State drivers paid for the average gallon as opposed to the rest of the country.

Tuesday’s hearing in Sacramento was meant to dig into the historic price spike that saw prices top $6.40 a gallon before dropping Tuesday below $5 for the first time in nearly nine months. But instead of exposing a smoking gun, the commission meeting ultimately revealed that regulators are “completely in the dark,” according to one state analyst, when it comes to critical oil industry operations that shape the state’s increasingly volatile gasoline market.

“Basically it is more authority” that is needed, said Quentin Gee, an analyst for the energy commission.

The hearing comes amid a push by Gov. Gavin Newsom to levy a new “windfall profits tax” on oil companies that will be at the center of a special session in the Legislature this January.

The commission called on state experts to testify on a question that has plagued drivers for decades: Why are gas prices in California so high?

“What explicitly do we need to be able to understand why there’s a mystery surcharge, why California pays more?” said commissioner Patty Monahan. “I’m wondering if anybody can kind of walk through what they would recommend?”

Gordon Schremp, the commission’s top analyst, outlined a series of conditions that led to the historic gas price spike, including lower-than-normal gasoline inventories among the state’s oil refiners, lower-than-normal fuel imports and mechanical hiccups that fueled a supply shortage. But Schremp said his agency had no way to access company-level information to explain why the state’s handful of oil refineries let their inventories dwindle and decreased their foreign fuel imports despite the supply crunch.

Jamie Court, with Consumer Watchdog, said Tuesday’s meeting — including the panel of experts — echoed the same frustrations California’s drivers have seen for decades.

“I was on the 2000 gas pricing task force,” said Court, who called on the state Senate to issue subpoenas demanding oil company data. “The same six people in the room talking about this stuff isn’t going to get it done.”