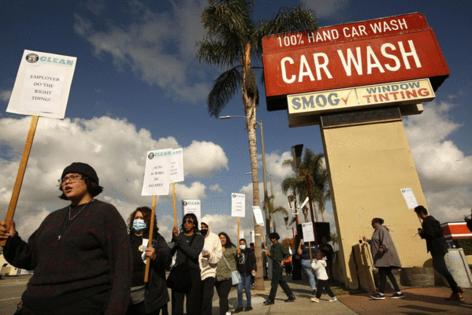 In the latest crackdown against wage theft in Southern California, state officials said Tuesday they would penalize an Inglewood carwash operator more than $900,000 for paying workers far below the minimum wage and denying them overtime and rest breaks.

Over a three-year period that ended in 2021, Shine N Brite carwash paid 15 workers a daily flat rate as low as $70 for eight to 10 hours of work, Labor Commissioner Lilia García-Brower said.

During that period, the state minimum wage went from $10.50 an hour to $13 an hour for businesses with 25 or fewer employees.

"These workers were paid as low as $7 an hour, which is unconscionable," García-Brower said. "This employer used different schemes to avoid paying legal wages, such as paying flat daily rates, and paying workers in cash."

At the carwash Tuesday morning, seven workers were vacuuming and polishing cars. Joe Zarabi. who said he was the manager and cousin of owner Michael Zarabi cousin, said he was unaware of the citation. He refused to discuss what workers were paid.

All of the Shine N Brite workers are immigrants from Latin America who speak little to no English, according to the Clean Carwash Worker Center, a small, foundation-funded nonprofit that brought the Inglewood case to the state's attention.

"The majority of carwashes are not paying workers for the full time they're working," said Flor Rodriguez, Clean's executive director. "Often there's no respect for overtime and some are forced to work for tips only."

Many workers, required to report to the job early in the morning, are not paid until they wash their first car, sometimes hours later. They spend long hours in the heat, exposed to harsh chemicals, and might not get lunch or rest breaks, Clean investigators say.

In Los Angeles County, more than 500 carwashes normally employ as many as 10,000 workers, although the number dropped during the pandemic. Business groups say most carwashes follow the law.

Owners often complain about Southern California's stiff competition as customers seek ever-cheaper service. And the workers, who might not have legal documents to work in the U.S., are leery of reporting wage theft.