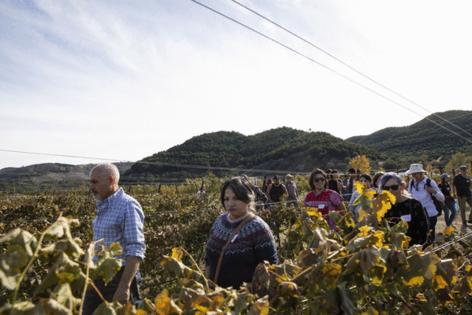 The son of migrant farm workers from Nayarit, Mexico, Hector Lopez said he wanted nothing to do with agriculture for most of his life after watching the way his parents were treated. Now retired, he changed his mind during the pandemic when he saw an opportunity to buy an avocado farm in Bonsall with the hopes of increasing local access to quality produce.

On a recent morning, Lopez stood at the crest of the hill that hosts his 12-acre Tierra Sana Farm, surrounded by dozens of eager visitors with questions about his practices.

"That passion was born in me again," he said to the group in Spanish.

His farm was the first stop on a tour by the Latino Farmer Conference, which came to San Diego County over two days last week and was hosted by the National Center for Appropriate Technology and the U.S. Department of Agriculture Natural Resources Conservation Service. In its eighth year, the conference focused on bringing information about conservation, organic farming, regenerative agricultural practices and business management to Spanish-speaking farmers.

Omar Rodriguez, a conference organizer and sustainable agriculture specialist with the National Center for Appropriate Technology, said the conference, which happens in different California locations each year, is intended as both a place for farmers to network with each other and for them to connect with organizations that provide resources and support.

"First and foremost, it's a conference based around conservation — teaching cultural practices and management practices that are ecologically focused," Rodriguez said. "Beyond that, we also recognize that a farm needs to have sound business fundamentals and a good marketing strategy in order to even be able to think about conservation and soil health and things like that, so a big component of the Latino Farmer Conference does happen to be business management and leadership."

The first day consisted of a tour of several farms in North County, and on the second day, attendees gathered at the California Center for the Arts for presentations and panels, as well as more networking. Rodriguez estimated that about 250 people attended. They came from all over California, and some even came from as far away as New York.

At the first stop, Lopez shared his experiences getting a grant from his water district to study his watering efficiency and improve it. The farm had been partially abandoned when he bought it, he said, and the watering system was old. He said that when he watered his trees, he lost about 45 percent of the water because of the inefficient system. With the improvements made using the grant, he now has 94 percent efficiency, he said.

He also demonstrated a compost tea process that he uses to provide nutrients to his plants weekly.