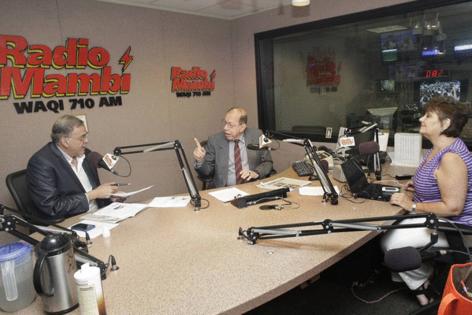 MIAMI — Latino Media Network, the newly formed media company that stirred controversy when it announced plans this summer to purchase Miami’s Radio Mambí along with 17 other stations in Hispanic markets, has been approved by the Federal Communications Commission to buy the Spanish-language stations from TelevisaUnivision.

This week's decision by the FCC is a significant step toward finalizing the $60 million deal.

On Wednesday, a Latino Media Network spokesperson said the company continued to “focus on creating a broadcast network that is owned by and made for our country’s rapidly growing Latino population.”

“As we move in 2023, we will be listening to the communities we serve to help build a multimedia network that inspires, informs and celebrates our unique Hispanidad,” the spokesperson said.

Once announced this summer, the deal quickly became political as members of Congress from around the country debated Latino Media Network’s purchase, particularly as it pertained to Radio Mambí.

Conservative critics warned that LMN’s leaders, who have ties to Democratic campaigns and left-leaning networks, would push changes out of step with the audience for the station, an institution in the Cuban exile community in Miami. Democrats, who in recent years have warned of the spread of misinformation on Spanish-language radio and media networks, advocated for the sale to go through.

Another flash point emerged in the money behind the deal.

When the deal was first announced, Lakestar Finance had an option to claim up to 49% stake in the company following the consumation of the sale. Latino Media Network has since told the FCC that now Lakestar’s max ownership stake is 19.9%. LMN must remain Hispanic-owned at all times, the debt financing certification states.

Both LMN and Soros, a billionaire who donates to progressive and left-leaning causes, deny assertions that he’ll decide how the station will be run, or what is said on its shows.

Still, conservatives have continued to assail the deal, and in August, a longtime Miami resident and “avid listener” of Radio Mambí and Univision America, Pedro Roig objected to the LMN purchase. He raised questions about how the stations would be managed, calling it “highly unusual.”

The petition brought on by Roig was created to block the sale of the 18 stations, but the FCC said he didn’t follow the required procedures or provide evidence to support his allegations against the purchase.

“We have reviewed the application and find that Univision is qualified to assign, and LMN is qualified to hold, the licenses for the stations,” FCC Audio Division Chief Albert Shuldiner said in a decision released Monday.

Following FCC approval, Univision will continue to program LMN’s stations once LMN acquires them. Until then, TelevisaUnivision will remain operating the 18 Spanish-language stations.