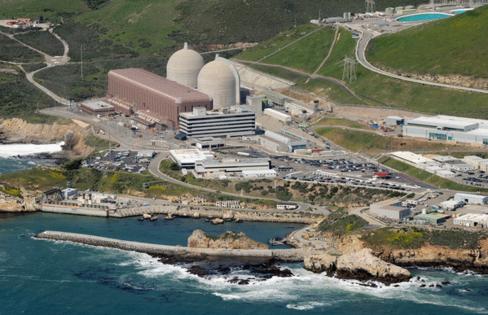 The case for nuclear power as a climate solution got a big boost Monday when the Biden administration announced it's giving Pacific Gas & Electric Co. a $1.1-billion grant to help the company keep operating California's last nuclear plant.

The Diablo Canyon plant is currently scheduled to shut down in two phases, with the first reactor going offline in 2024 and the second in 2025. But Gov. Gavin Newsom has led a spirited push to keep the reactors humming another five years, saying they're badly needed to help the Golden State grapple with power shortages and worsening heat waves.

The federal money doesn't guarantee Diablo Canyon will stay open longer. But it's looking increasingly likely California will rely on the plant for at least a few additional years — despite decades of antinuclear activism and continued public concerns about what would happen if an earthquake erupts along one of the seismic fault lines near the facility.

"It is a good choice for the state of California — and for frankly the planet — that a well-performing plant like Diablo Canyon could continue to serve," Poppe said in an interview.

The $1.1 billion in federal money comes from the infrastructure law passed by Congress and signed by President Biden last year. It should allow PG&E to pay back most of the $1.4-billion loan for Diablo that state lawmakers approved at Newsom's urging.

That state money is slated to help PG&E cover the costs of relicensing at the U.S. Nuclear Regulatory Commission, as well as maintenance, fuel purchases and additional on-site storage for radioactive waste needed to keep the plant running past 2025.

Final terms of the federal grant still need to be negotiated with PG&E. Officials at the U.S. Department of Energy say the money will be distributed over four years, from 2023 through 2026. It's designed to cover PG&E's projected losses from keeping Diablo Canyon open longer, so if the company's operating costs come in lower than expected — or its power-sales revenues are higher than expected — it won't get quite as much federal money.

If the plant fails to secure its federal license renewal — or any of the state permits it needs to keep operating — the funding spigot will be shut off.

"This is a critical step toward ensuring that our domestic nuclear fleet will continue providing reliable and affordable power to Americans as the nation's largest source of clean electricity," Energy Secretary Jennifer Granholm said in a written statement.