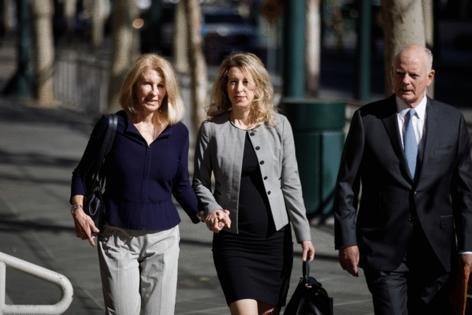 Holmes, convicted in January on four counts of felony fraud in connection with her failed Palo Alto blood-testing startup, was to be sentenced Oct. 17 in U.S. District Court in San Jose.

But in August, a key prosecution witness — former Theranos lab director Dr. Adam Rosendorff — showed up at her home. According to Holmes’ partner Billy Evans, who is the father of their one-year-old son, Rosendorff said he felt “guilty,” and “like he had done something wrong.” The doctor purportedly told Evans that while on the witness stand, “he tried to answer the questions honestly but that the prosecutors tried to make everybody (in the company) look bad,” and that the prosecution “made things sound worse than they were.”

Holmes’ legal team argued that Rosendorff’s statements indicated that federal prosecutors may have engaged in misconduct with regard to the former lab director, and they demanded that Judge Edward Davila either throw out the jury’s verdict, or schedule a hearing to address the matter. Although prosecutor John Bostic contended Monday in a court hearing via Zoom that a subsequent declaration by Rosendorff showed his trial testimony was truthful, Davila agreed to the defense’s demand for a hearing.

The “limited” hearing will address the allegation of possible prosecutorial misconduct, Davila said. “This is not going to be a fishing expedition,” Davila told Holmes lawyer Lance Wade. “Really, what I want to know is, ‘Did (Rosendorff) tell the truth?'” Davila said.

Holmes, on camera in a white-walled room, wearing a blue blazer and white blouse, did not appear to show a significant response to the delayed sentencing. Legal experts expect she will receive a multi-year prison sentence.

The jury found Holmes guilty of defrauding investors in the now-defunct Palo Alto blood-testing startup she founded in 2003 at age 19. Theranos went bust in 2018 after the charismatic Holmes and her former lover, the firm’s chief operating officer Sunny Balwani, were charged with fraud. The case attracted world-wide attention, and spawned three documentaries, a TV series, a best-selling book, and an upcoming movie starring Jennifer Lawrence as Holmes. Balwani was found guilty in July on a dozen fraud counts.

Rosendorff, in his testimony at her trial, said Theranos “valued PR and fundraising over patient care” and that he had felt a moral obligation to go public about inaccurate test results.

After Rosendorff appeared at Holmes’ residence, prosecutors filed in court a sworn declaration by Rosendorff stating that he feels “compassion” for Holmes, and “even more” for her family members who would be affected by her punishment. But, he added that he had answered every question on the witness stand “completely, accurately and truthfully” and stands by his testimony.

“I have no reason to believe that the government misrepresented or otherwise created a misimpression about Ms. Holmes’ … conduct at Theranos,” Rosendorff wrote.

The prosecution claimed Holmes was trying to use Rosendorff’s visit as a “ticket to a new trial.”

Holmes lawyer Wade on Monday argued that Rosendorff’s declaration did not address the central concerns he’d raised while speaking with Evans.

Davila set Oct. 17 as the hearing date to bring Rosendorff before the court, and added that he did not expect the hearing to last all day. The judge gave both sides several options for a new sentencing date, “should sentencing be needed.” Possible dates, Davila said, were in mid-November, early December or mid-January. Bostic told Davila there was a “public interest” in proceeding with sentencing as soon as possible.