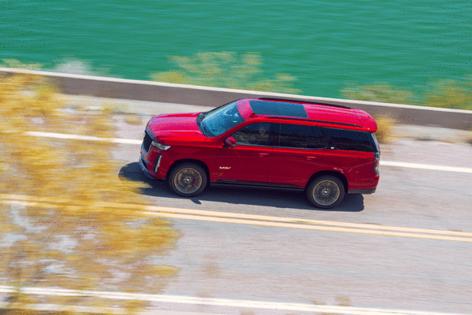 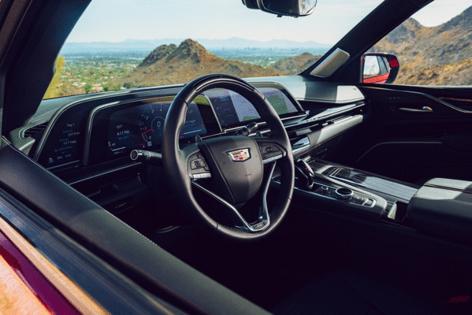 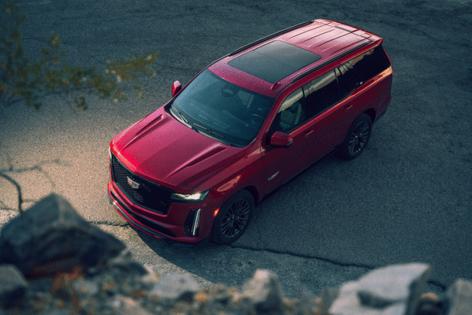 This is not a vehicle that goes quietly into the night, but would you expect that of the 2023 Cadillac Escalade-V? This is the high-performance rendition of Cadillac’s biggest beats, its inner demon writ large as a full-size, full-on luxury, high-performance, body-on-frame SUV.

In another era, this would have been an Eldorado powered by an 8.0-liter V-8. The vehicles are radically different, but the intent is the same. Full-size comfort, every mod con, over-the-top presence, and effortless power. Fuel economy? Darling, if you can afford a $150,000 supercharged V-8 truck the size of a garden shed, you can afford the fuel. Heck, it’s almost as large as those tiny houses on HGTV. Of course, given that the front center console has a small fridge, you could almost live in it. Almost.

It's far better to drive. You’ll never believe a hippo can tango.

The numbers tell the tale. Its supercharged 6.2-liter V-8, 10-speed automatic transmission and all-wheel drive runs 0-60 mph in 4.4 seconds, according to General Motors. And it does so with a soundtrack that should thrill its owners. The burble at idle, the deafening roar upon acceleration, the pop and crackle of the exhaust as it decelerates — it’s a magical symphony you’d never think rational. Of course, it isn’t rational, which is what makes it so endearing.

With its slab-sided styling, massive vertical grille and squinting LED headlights, its shear intimidates other motorists, as does its resounding roar. While some drivers skulk away, others give you a hearty thumbs up, while still others will try to race you, mostly without success.

But it’s not just straight-line moxie that proves satisfying; it’s the everyday maneuverability. Yes, it’s size is large enough you’d be tempted to name it Horton. But Cadillac engineers skillfully tweaked its underpinnings to quell excessive body motion without affecting its ride comfort, while making spirited driving somewhat possible. Of course, an adaptive air suspension helps. Yet it’s still a body-on-frame truck, so don’t expect the sort of performance you’d get in a smaller unibody crossover. But you get more than enough to keep you smiling. This is a fun rig.

Until you go to the fill the tank. Around town, mileage was 10.6 mpg, and highway driving raised that to 14.5 mpg. Oh, and it requires premium fuel. But you knew you were in for that with this rig, right?

And it’s posh, for the most part. OK, like other Escalades, it becomes less so the further rearward you go. In fact, there aren’t any grocery bag hooks in the rear cargo hold. Is it assumed that Escalade owners only get their groceries delivered?

But it’s hard to argue with the luxurious cabin, filled with accessories that make living large so easy. The ventilated and heated seats. The center console bin that doubles as a fridge. The AKG audio system that transforms the Escalade-V into a rolling concert hall. The massive panoramic sunroof. It’s all here.

You also get Apple CarPlay and Android Auto as well as GM's OnStar and Connected Services Premium Plan, a mandatory option that adds $1,500 to the base price whether you want it or not. But it does add a mobile hotspot and other services, although at first glance this seems like a way to prop up a feature that buyers otherwise don’t seem to want.