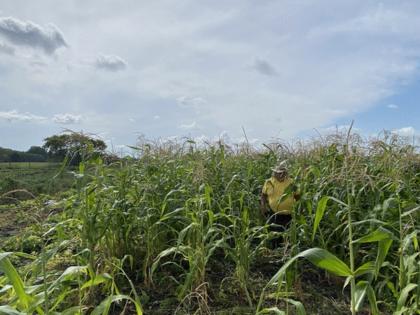 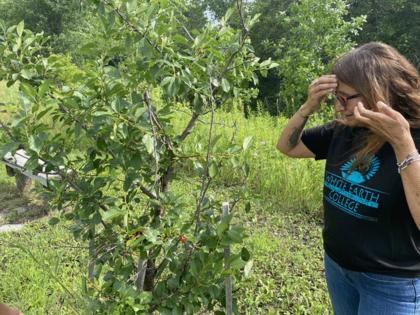 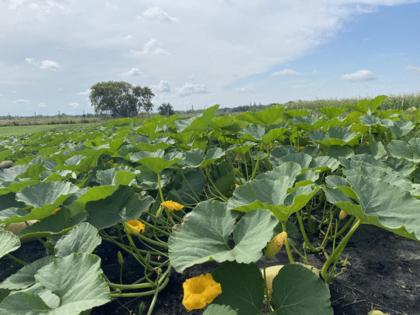 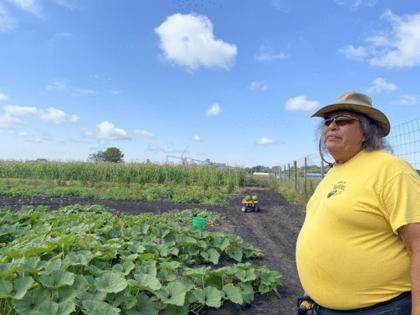 MAHNOMEN, Minnesota — Hours after a parade ends marking the White Earth Tribal and Community College's 25th anniversary, Robert Shimek is standing near some squash in a field, marveling at a bumblebee crawling into a blossom.

"Oh, that's a great big one," said Shimek, an extension employee with the college. "That tells you the soil is healthy."

Behind Shimek rises heirloom corn, stretching up to 9 feet in the September sky. On a platform, another staffer has plucked four juicy watermelons for wild rice camp this late summer weekend. And green vetch and field peas — a cover crop — sprout over black dirt.

It may not look like a lot, but on this 1-acre field behind the tribal college, just above the Wild Rice River and abutting a deer fence, the seeds of a food revolution are germinating on the White Earth Indian Reservation.

Already this fall, students and staff have harvested tomatoes and beans off the field. Last year, the school's farm, now in its third growing season, produced 2,000 pounds of produce, from edible beans to squash. And it'll all go to feed the community — filling the drum hall, local convenience stores and the homes of elders. It's an effort to provide relief to gnawing hunger on the reservation.

"The average age of our students here is 32, which means the majority of them have children," said Lisa Brunner, director of extension at White Earth Tribal and Community College, with a main campus in Mahnomen. "If mom and dad are food insecure, so are the children."

The surrounding Mahnomen County is a geologic oddity. One third of the reservation sits on the western edge of the eastern white pine forest that runs to Maine. A hardwood forest juts through the middle. And the tribal college rests on prairie pothole land.

According to a survey published in February 2020 by the Hope Center for College, Community and Justice at Temple University in Philadelphia, 67% of White Earth tribal college students had experienced food insecurity in the prior 30 days.

On a Monday morning in mid-July, student Asia Bevins tended to a crop of corn, squash and green beans, grown in the traditional, Indigenous "three-sisters" model, where interplanting helps each individual crop thrive.