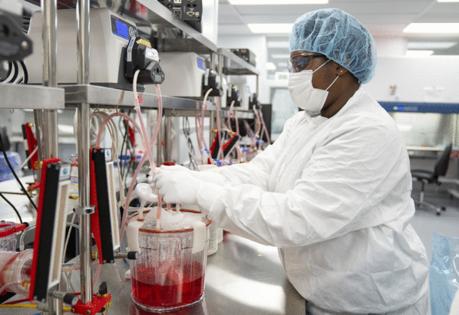 Miromatrix Medical, a biomedical firm based in the Twin Cities suburb of Eden Prairie, is exploring the scientific area known as xenotransplantation.

Xenotransplantation is a blanket term for a wide range of biomedical procedures aimed at increasing the options, and shortening the waitlist, for people in need of donated organs. The U.S. Food and Drug Administration defines it as any procedure involving the transfer of cells, tissues or organs from a nonhuman animal source into humans.

Nearly 100,000 Americans are waiting for a kidney and about 23,000 patients receive transplants each year, said Claire Johnson, program manager for the National Kidney Foundation's Minnesota operations. The technologies underway at Miromatrix and its competitors are aimed at creating new sources of implantable organs.

"The implications could be enormous for eliminating the waitlist," Johnson said. "It would be transformative."

A high-profile case earlier this year shed light on both the promise and continued challenges of xenotransplantation. A genetically modified pig heart was transplanted into 57-year-old David Bennett at the University of Maryland Medical Center. Although he died two months later, researchers viewed the procedure as a success because Bennett's body did not reject the organ.

Miromatrix Chief Executive Jeff Ross said that — unlike the Maryland case — their system removes all pig cells, including any viruses, from the organs in a process known as "decellularizing."

"We start with that pig organ, but we're removing all the cells. … We call them 'bioengineered organs,' " Ross said, adding that Miromatrix's competitors are using genetically modified pig organs.

Xenotransplant research stretches back decades, with pig organs having proved to be the best animal source for transplantation as they are roughly the same size as human organs.

There are two primary concerns in this field: immunosuppression and the possible transmission of animal viruses. To address the immunity concern, drugs are given to lower a patient's natural immune response in hopes the body won't attack the transplanted organ.

In the mornings, Rosa Andresen showers hurriedly before her daughter wakes up, worried the 24-year-old might suffer a seizure or tumble out of the bed while she is still shampooing her hair.

The fastest commute to Manhattan by land, sea or air takes just 20 seconds to catch wind.

Atlanta has the highest income inequality among large U.S. cities, according to recent data from the United States Census Bureau. Driving much of Atlanta’s income inequality, experts say, is the city’s entrenched ...Read More

WORTHINGTON, Minnesota — In a basement office, across the street from the Casey's convenience store and just a block from the high school football field, a sign on the window for PSSI, a meatpacking janitorial service, ...Read More

U.S. trucking is entering a tumultuous period that will likely reshape the $875 billion industry.

Shipping rates that spiked during disruptions caused by the pandemic have plummeted — some are now calling it a “...Read More