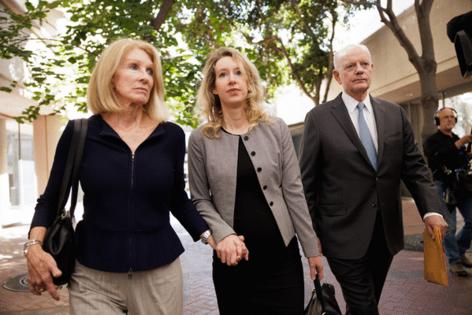 Convicted by a jury in January for defrauding investors in her now-defunct Palo Alto blood-testing startup, Holmes is scheduled to be sentenced Oct. 17 on four felony counts. Legal experts anticipate Holmes, 38, will receive a multi-year prison sentence. But recent court filings and a judge’s order have thrown that sentencing date into doubt.

Earlier this month, Holmes filed a flurry of motions in U.S. District Court in San Jose to have the jury’s verdict thrown out and order a new trial.

In one of those bids, Holmes’ legal team claimed that the appearance at her home by former Theranos lab director Dr. Adam Rosendorff, and his statements to Holmes’ partner Billy Evans, provided “new evidence” requiring a second trial.

In testifying against Holmes, Rosendorff had told the jury that Theranos “valued PR and fundraising over patient care,” and that he felt “obligated from a moral and ethical perspective to alert the public” about inaccurate test results. In response, a lawyer for Holmes sought to pin problems at the company on Rosendorff’s alleged “incompetence.”

Holmes, in a motion filed earlier this month, said a disheveled and apparently remorseful Rosendorff drove up to her home last month and talked to Evans, with whom she has a young child. According to a memo from Evans filed in court, Rosendorff said he felt “guilty,” and “like he had done something wrong.” The doctor purportedly told Evans that while on the witness stand, “he tried to answer the questions honestly but that the prosecutors tried to make everybody (in the company) look bad,” and that the prosecution “made things sound worse than they were.”

Holmes’ motion also said that if the judge declined to order a new trial based on Rosendorff’s purported statements, he should at least hold a hearing “to determine the meaning of Dr. Rosendorff’s statements and to determine whether any government misconduct occurred.”

On Sept. 21, federal government prosecutors fired back with a motion, accompanied by a sworn declaration by Rosendorff stating that he feels “compassion” for Holmes, and “even more” for her family members who would be affected by her punishment. But, he added that he had answered every question on the witness stand “completely, accurately and truthfully” and stands by his testimony.

“I have no reason to believe that the government misrepresented or otherwise created a misimpression about Ms. Holmes’ … conduct at Theranos,” Rosendorff wrote.

That declaration, prosecutors argued, show there is no basis for a new trial, or even for a hearing that could involve Evans describing Rosendorff’s visit.