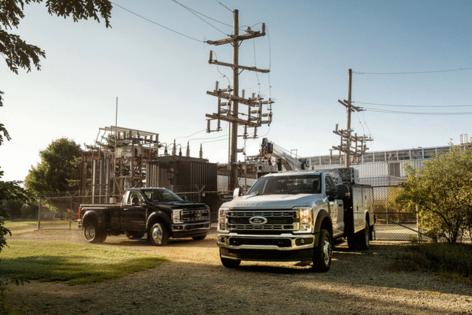 The redesigned lineup of pickup trucks and chassis cabs features new technology and targets best-in-class towing, payload, torque and horsepower in the heavy-duty full-size truck segment, according to Ford.

The 2023 Super Duty will have four available engine options, including the all-new standard 6.8-liter V8 gas engine and a new high-output 6.7-liter diesel V8 engine. The vehicles also will come equipped with embedded with 5G connectivity, enabling capabilities such as over-the-air software updates and WiFi hotspot access for up to 10 devices.

The redesigned lineup also adds an available trailer navigation tool and the new Ford Pro Upfit Integration System that's designed to make it easier for commercial customers to add and operate equipment such as snowplows.Ford employees and executives revealed the new lineup during an event at Churchill Downs in Louisville Tuesday night.

"Super Duty is a name that is trusted to get the job done, and our customers have helped to make it the most popular commercial truck in America, bar none," Ted Cannis, CEO of Ford Pro, said in a statement. "With state-of-the-art technology, including a 5G modem connected to a powerful ecosystem of productivity-boosting software and services, the all-new Super Duty can seamlessly shift from workhorse to office of the future."

Underscoring just how lucrative the F-Series lineup is for the Blue Oval, Ford said Super Duty generated more revenue in 2021 than some Fortune 500 companies — including Southwest Airlines and Nordstrom.

"Cloud-based software connects to the UIS so equipment makers can add digital buttons that allow drivers to control their equipment from inside the truck," the company said in a news release. "The system also allows for high levels of customization and safety interlocks, like preventing the transmission from shifting into drive with a raised boom lift."

Pro Power Onboard, which allows drivers to turn their vehicles into mobile generators, will be available on Super Duty with the new model year. The lineup comes with a 10-speed automatic transmission.