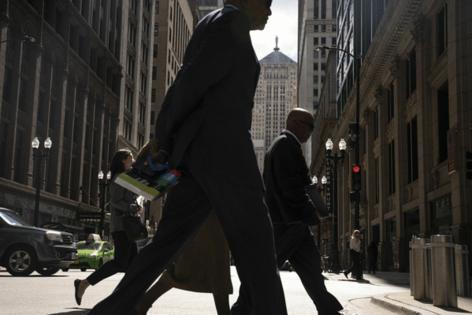 Chicago Mayor Lori Lightfoot unveiled a plan Monday to revive the LaSalle Street corridor, a key downtown office district that suffered the double whammy of COVID-19 and the loss of several large firms to new towers rising farther west along Wacker Drive and in Fulton Market.

The mayor said it’s time to take advantage of the Loop apartment boom and fill the corridor’s empty offices with new renters, including hundreds of low- and moderate-income workers typically shut out of downtown living.

“We must restore this area to its full potential,” said the mayor. “But do so with an eye toward equity.”

The street’s road to recovery could be long. This year’s loss of major LaSalle Street office tenants such as BMO Harris and law firm Chapman & Cutler, which left for the West Loop’s new BMO Tower, were just the latest of many exits, and the mayor estimated during an afternoon news conference that about 5 million square feet of commercial space on the surrounding blocks lies vacant.

But city officials envision developers using an array of government financing tools to create over five years about 1,000 new apartments on the several blocks of LaSalle Street between Washington Street and the Chicago Board of Trade Building, as well as nearby streets. They also plan to fill up the many empty storefronts by bolstering local restaurateurs and retailers, who started drowning in red ink when the pandemic hit and customers disappeared.

Downtown’s prospects did brighten when Google agreed this summer to buy the James R. Thompson Center for $105 million and announced plans to use the entire 17-story structure as office space. The company helped spark the transformation of Fulton Market, a former industrial neighborhood, into a gleaming office center and upscale residential neighborhood when it established its Midwest headquarters there in 2015.

But as Lightfoot gears up for next year’s reelection campaign, she wants to avoid any criticism that she places too much emphasis on downtown development, a charge frequently leveled at predecessors such as former Mayor Rahm Emanuel.

During the news conference she talked up the administration’s Invest South/West program, which gives financial incentives to developers who launch projects in underused commercial corridors on the South and West sides, and the 2021 reform of the city’s Affordable Requirements Ordinance, which increased the amount of affordable housing units required for many new residential projects.

The new downtown initiative will follow that path, she added. Thirty percent of the 1,000 units created will be reserved for affordable housing, currently a scarce commodity in the central business district.

“Today, there are only two completed ARO units in the central business district, and none on LaSalle Street,” she said.