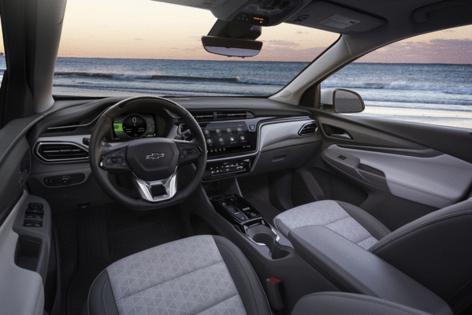 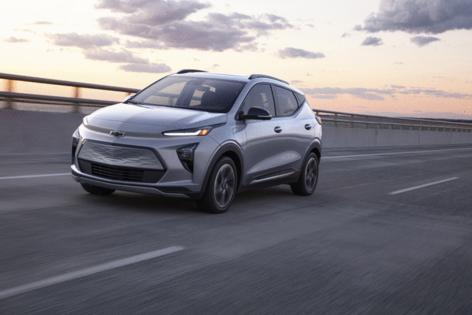 Many car buyers are considering electric vehicles, or EVs, for the first time and they’re facing more choices than ever. They are also facing sky-high prices. The average transaction price of an EV in July was $66,000 according to Cox Automotive. That makes the price of the Chevrolet EUV, a crossover rendition of the smaller Bolt EV, well worth considering despite the lack of a $7,500 federal tax credit.

The Bolt EV debuted in 2017 as a four-door hatchback and was the company’s first mass-produced EV with 200 miles of range and a spacious interior despite its diminutive footprint. But GM’s usual lack of marketing, and two years of recalls due to battery fires, have done little to endear it to anyone. Yet the fires were a result of a manufacturing failure by battery supplier LG Chem, not GM. Once the issue was resolved, the solution was incorporated into new battery modules and retrofitted into recalled ones. The new packs, manufactured in Michigan, are warrantied for eight years and 100,000 miles.

Once the assembly lines were rolling again, the Bolt EV was joined by the Bolt EUV, or Electric Utility Vehicle, that’s 6.3 inches longer than the Bolt EV while being only 0.2 inch taller and wider. This adds a meaningful 2.6 cubic feet of passenger space compared to the Bolt EV. It can clearly be seen in the rear seat, where leg room is far more hospitable for adults. The driver sits up high with a commanding view of the road with good seat comfort and rear visibility.

Cargo capacity between the Bolt EV and EUV is nearly identical at 17 cubic feet, increasing to 56.9 cubic feet when the Bolt EUV’s back seats are folded. Not bad for a car that’s less than 170 inches long.

Overall, interior ambiance feels contemporary and nicely trimmed, with quality materials and good fit and finish, a result of more soft-touch surfaces being added for 2022. That said, you will still find the occasional bit of hard plastic.

A 10.2-inch color touchscreen with sharp visuals and blazingly quick responsiveness serves as the focal point of the instrument panel. A wireless charging pad at the bottom of the center console. Apple CarPlay and Android Auto are standard, along with a USB-A and USB-C port in each row.

Although the company is developing newer, pricier EVs like Cadillac Lyric and GMC Hummer on the company’s new Ultium battery platform, the Bolt uses an older version of GM’s battery electric technology. But the Bolt costs far less, while still delivering an EPA-estimated 247 miles of range. Front-wheel drive is standard, all-wheel drive is not available. A DC fast charger provides 37 miles of range per hour, while a 240-volt plug provides 37 miles of range per hour, or a full charge in approximately 10 hours.

Performance comes from a single, front-mounted permanent magnetic drive motor that generates 200 horsepower and 266 pound-feet of torque. It also comes with Super Cruise, GM’s advanced driver-assistance system that steers the Bolt for the driver and automatically regulates the vehicle’s speed depending on traffic flow on pre-mapped roads.

Like every EV, the Bolt EUV’s instantaneous torque makes for fast work of take-offs or overtaking other vehicles. In fact, there’s enough to make the front wheels to howl a little too easily, a result of their low rolling resistance. Yet if you've never driven an EV, nothing will prepare you for the unearthly calm with which the EUV’s speed is transmitted. It makes you wonder why a gas engine’s noise and fuss was necessary — or put up with. It is quite controlled and well behaved, with a comfortable ride, some body lean in corners, and a little body motion over uneven ground.

The Bolt delivers an accurate range readout when driven gently. In order to get the most range per charge, EVs actually encourage you to drive softly by gliding to a stop and gently accelerating. Think of it as a new kind of driving ability. If you drive aggressively, your range will vanish more quickly than a politician's scruples.