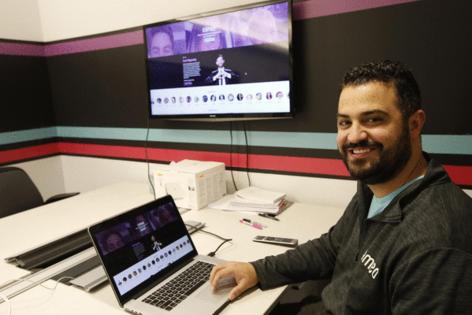 Starting Thursday, fans can schedule a 10-minute video call with the likes of former pro wrestler Mick Foley, Sean Astin, who played Sam the hobbit in “Lord of the Rings” or Dorinda Medley of “Real Housewives” fame. The video calls are booked through the Cameo website or Cameo Live app, and can be shared with up to nine other participants.

Imagine a Zoom call with your Aunt Martha and former Illinois governor and convicted felon Rod Blagojevich, for starters.

Like many recent business innovations, Cameo Live grew out of the evolving virtual world of the pandemic.

“During COVID, we saw that it was really popular for celebrities on Cameo to start doing Zoom calls with their fans,” said Steven Galanis, Cameo’s co-founder and CEO. “This would allow a fan to have something like a Zoom call, but better, for 10 of their closest friends and the talent they want to hang with.”

Launched five years ago, Cameo broke new ground in the star-fan relationship by offering personalized video messages from celebrities that have been used for everything from birthday greetings and prom invitations to marriage proposals. Last year, Cameo introduced a two-minute virtual meet-and-greet, which has been expanded into the equivalent of a celebrity Zoom call.

The talent roster for recorded video greetings has thousands of celebrities including actors, athletes, comedians, musicians and social media influencers. A personalized video from actress Lindsay Lohan starts at $500. Musician Kenny G is listed at $350. Barry Williams from “The Brady Bunch” will record a video for as little as $140.

Blagojevich, the former Illinois governor whose federal prison sentence for corruption was commuted in 2020 by then-President Trump, is a relative bargain, with live video chats starting at $300, according to the Cameo website.

Developed at Chicago tech incubator 1871, Cameo was co-founded by Galanis, Devon Townsend and Martin Blencowe. The business model was inspired by a personalized birth congratulations video that Blencowe recorded from NFL defensive end Cassius Marsh to send to a friend.

Cameo, which has raised $165 million from investors to date, takes a 25% commission from each transaction. Last year, during its most recent fundraising round, Cameo reported $100 million in gross revenue for 2020, delivering 1.3 million recorded messages.

Galanis declined to disclose current annual revenues for the privately held company, but said it is a “bigger business than it was two years ago.”

Last month, Cameo moved into new offices on the seventh floor of the massive former Sports Authority building at 620 N. LaSalle St. in River North. The company has about 60 employees in Chicago, and Galanis is looking to reel them back in from remote working, as Cameo goes live with its latest product.

“We’re encouraging people to start coming back to the office, because we thought that was always a special part of our culture,” Galanis said. “We’re getting about 20 to 30 starting to come in now a few days a week.”