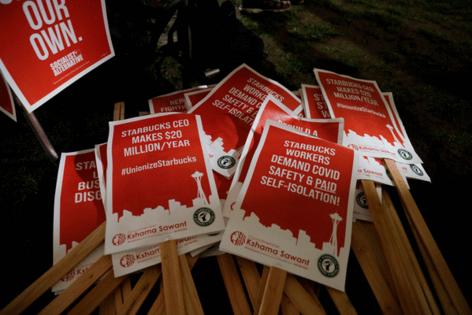 Starbucks Corp. has to offer reinstatement to seven fired pro-union employees in Memphis, Tennessee, and must not retaliate against employees who support union organizing, a federal judge ruled.

The firings appear to be illegal in light of evidence the company acted in a discriminatory manner, U.S. District Judge Sheryl Lipman said in an order Thursday.

The decision is a victory for the U.S. National Labor Relations Board, which has been confronting an alleged crackdown by Starbucks on a nationwide unionization push by its workers.

The union Starbucks Workers United has prevailed in elections this year at over 200 of the chain’s roughly 9,000 corporate-run U.S. stores, which were all union-free until the labor group’s first victory last December. NLRB regional directors around the country have issued more than 20 pending complaints against the company.

Starbucks, which has denied wrongdoing, said it planned to appeal and would ask that the ruling be put on hold in the meantime. “Interest in a union does not exempt partners from following policies that are in place to protect partners, our customers and the communities we serve,” the company said in a statement.

The company has said that the Memphis employees weren’t punished for their involvement with the union or for talking to the media, but rather because they let off-duty staff and non-employees, including journalists, into their store when it was closed, and violated numerous safety rules.

The fired employees, who call themselves the “Memphis Seven,” are the most prominent among dozens of workers across the country who the union argues were fired for organizing. Since being terminated, the Memphis employees have taken part in protests in Tennessee and in Starbucks’ Seattle hometown, spoken at the South by Southwest festival, met with lawmakers, and worked to organize fellow baristas.

“We’re beyond thankful the federal court ruled in our favor, and this just goes to show that Starbucks will do everything in their power to silence us,” Nabretta Hardin, one of the fired pro-union employees in Memphis.

But the labor board, which prosecutes alleged violations of that law, has no authority to make companies pay punitive damages. Disputes over alleged retaliatory firings can drag on for years, hampering organizing efforts even if the employee eventually prevails.

NLRB regional offices investigate claims. If they find merit in the claims and can’t reach a settlement, the offices issue complaints which are then considered by agency judges.

The judges’ rulings can be appealed to NLRB members in Washington and from there to federal court. The NLRB’s top prosecutor, Joe Biden appointee Jennifer Abruzzo, has said she plans to “aggressively” seek federal court injunctions to get wrongly fired employees back to work more quickly.

“Starbucks, and other employers, should take note that the NLRB will continue to vigorously protect workers’ right to organize without interference from their employer,” she said in an emailed statement.

In a June filing, Starbucks argued there was no need for an injunction because the evidence showed the firings had not actually hurt the union organizing efforts. Instead, the company wrote, “the discharges emboldened union organizing activities in Memphis and throughout the nation.”