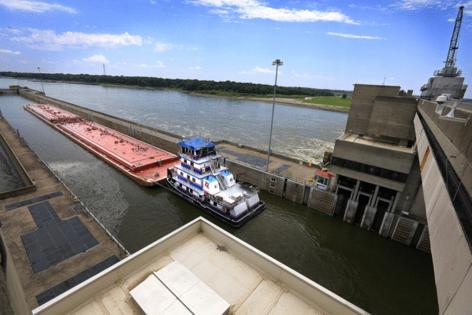 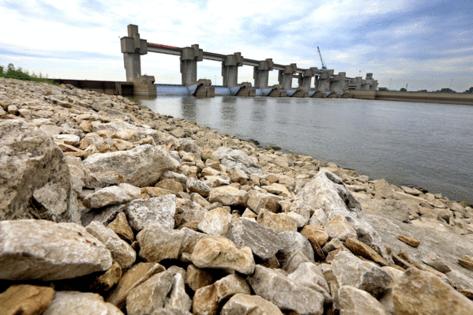 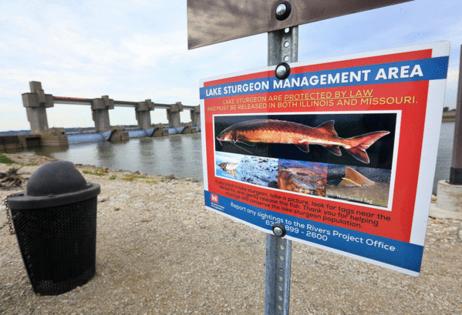 WEST ALTON, Missouri — On the rocky banks of the Mississippi River two dozen miles north of St. Louis, there's a clash brewing between clean energy and wildlife conservation, with both sides aiming to repair damage wrought by humans.

On one hand, an Alabama company is working to turn the locks and dam here into a hydropower plant, which could boost renewable energy in the region and reduce a long reliance on coal-fired power plants.

On the other, scientists have just discovered that decades of efforts to save a prehistoric fish, the lake sturgeon, are paying off: The river giant was caught spawning here this spring, for the second time in almost four decades.

But there's an equally gigantic problem: The spawning site — the only known location in Missouri — is directly under the dam. The hydropower plan, scientists say, threatens to ruin that spot for the fish.

"If we were to lose the one known site," said Travis Moore, lake sturgeon recovery leader for the Missouri Department of Conservation. "Well, that would be a step back."

The issue is of critical import to the St. Louis region and the country as a whole. Officials from President Joe Biden to the CEO of Ameren Missouri, the region's electric utility, are laboring to reduce carbon emissions, stem global warming, and, perhaps, trim the violent weather that has already set upon the world. In that battle, the move to green energy is key.

At the same time, those very leaders are also grappling with a worrisome problem: Midwest wind turbines kill birds by the scores. Northeast dams block the path of salmon returning to spawn. And large California solar arrays have been blamed for the deaths of thousands of birds, some of whom may have mistaken the shiny glass for water.

"It's just really impossible for any energy production source to have zero impact," said Wayne Krouse, CEO of Birmingham-based Hydro Green Energy, which is pitching the project in West Alton.

Hydro Green's proposal puts 10 turbines on the west side of the Mississippi next to the Melvin Price Locks and Dam here. They could deliver an estimated 438,000 megawatt-hours of renewable electricity to the region annually — enough to power almost 40,000 average U.S. homes for a year, a fraction of one of Ameren's big coal plants, but still a significant step toward cleaner energy.

"We're talking about literal tons of carbon dioxide that could be removed from energy production in the state," said Krouse.