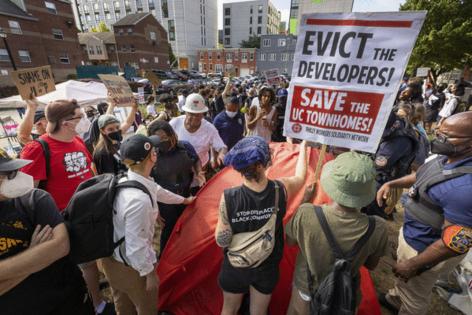 Tenants in 69 units at the University City Townhomes in Philadelphia are being forced to relocate after the building owner ended its federal contract to provide affordable housing on site. The company, IBID Associates, plans to sell the land.

The two-year fight to save the Townhomes has now landed in federal court, after the owners sued the city and City Councilmember Jamie Gauthier for allegedly violating their rights to sell the property. A protest encampment was disbanded this week.

The collapse of this long-standing affordable housing complex was dramatic and headline-grabbing, but the underlying story of expiring government subsidies is not unusual — and it could happen again.

How did the Townhomes come to be?

This kind of time-limited public-private partnership is how most affordable housing in America is provided. In traditional public housing, government entities own the property and provide generous enough subsidies to house even the poorest residents. But this New Deal-era program never received adequate funding for maintenance from Congress, and political support further waned as the tenant population in most cities became majority Black.

In the 1960s, policymakers began experimenting with providing affordable housing through public-private partnerships with expiring subsidies.

“Traditional public housing in the United States was never adequately funded, so it fell into disrepair and quickly became very politically unpopular,” said Emily Dowdall, policy director for the Reinvestment Fund’s policy solutions group. “Affordability that’s not permanent is appealing because you don’t have to put so much money into a capital budget.”

By the 1980s, the overwhelming majority of new units were created through programs such as project-based Section 8 and the Low Income Housing Tax Credit (LIHTC). In cities like Philadelphia, these partnerships tended to work well because housing markets were weak. In most parts of the city, private-sector real estate activity was negligible throughout the late 20th century as industries shuttered and large swaths of the population fled the city.

Affordability could be elongated by tapping government programs to repair the buildings. For the owners of properties like the University City Townhomes, it made sense to extend the subsidies on such properties because owners couldn’t make more money in the private sector.