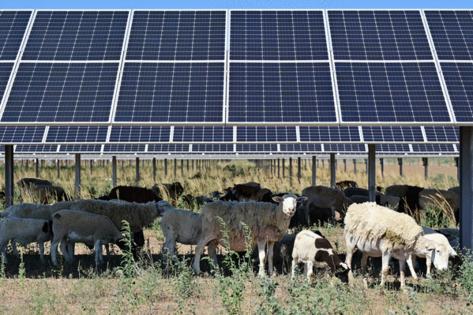 In a meeting Tuesday, the Delta County Commissioners approved a plan by Denver-based Guzman Energy for an 80-megawatt solar installation across 472 acres. Proponents say the farm, about two miles east of Delta, will help make Colorado a leader in combining renewable energy and agriculture at a time when there’s a push for more wind and solar energy in the face of climate change.

The land, which had been a ranch, will still be used for agriculture. An area ranching operation will graze 1,000 sheep on the land.

As utilities build or tap into new solar and wind farms, counties that are more accustomed to oil and gas wells than wind turbines and solar panels are figuring out how to respond. Guzman Energy, a wholesale power provider, says the approximately $80 million project will generate 350 to 400 jobs during construction and $13 million in property taxes over 15 years. It will generate enough electricity to serve about 18,000 households.

“We’ve tried to be really responsive to what the community was interested in and make sure we integrated that agricultural component,” said Robin Lunt, Guzman’s chief strategy officer.

Parts of rural Colorado have enthusiastically embraced large-scale renewable energy projects. The Western Way, a self-described conservative environmental organization, released a report in 2020 that said renewable energy has brought “thousands of jobs and investment and has supported communities” on Colorado’s Eastern Plains. The report projected that landowners would reap $15.2 million in annual lease payments by 2024 for hosting wind turbines.

But the prospect of more solar and wind projects cropping up across Colorado’s rural, open spaces has moved some local governments to call timeout. In January, Morgan County put a six-month moratorium on any projects until it could update its land-use codes.

“The reason we were concerned is because we had nothing in our regulations regarding the big solar and wind farms or even the battery-storage systems,” said Nicole Hay, the county planning department director. “We needed something in the regulations to help protect the residents of Morgan County so these projects weren’t just coming in and doing whatever they wanted because we had no regulations.”