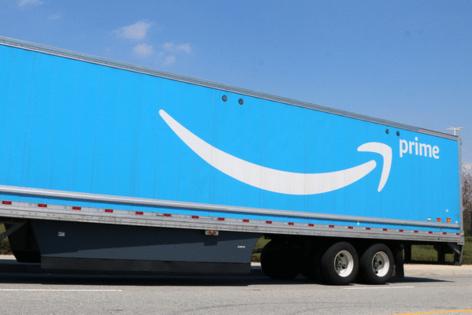 Organizers with a group called Inland Empire Amazon Workers United said in a Facebook post that 160 employees walked out at the San Bernardino International Airport facility, which is a critical part of Amazon's logistics network and one of the company's three U.S. "air hubs."

In a statement, Amazon officials disputed the number, saying that 74 out of roughly 1,500 employees at the facility walked out.

About 900 employees at the San Bernardino airport have signed a petition calling for base pay to be increased from $17 per hour to $22 per hour, Inland Empire Amazon Workers United said in a statement.

"Amazon could deliver a higher standard for workers, but they don't," said Sara Fee, who has worked at the air hub since it opened in March 2021. "A warehouse is just a warehouse. A company is just a company. The people are what makes it all work, and we are strong and united to fight for what we deserve."

Amazon is the largest private sector employer in the Inland Empire, organizers said. Of the more than 200,000 warehouse workers in the region, 1 in 5 work at Amazon facilities.

"Amazon promised the Inland Empire quality jobs," organizers said in another Facebook post. "They failed to deliver. Amazon has forced us to work in extreme heat, barely paid us enough to afford rent, and now we are being retaliated against for speaking up."

Paul Flaningan, an Amazon spokesperson, said the company respects employees' right to make their opinions known outside the workplace and that there were "many established ways" that workers can voice concerns internally.

"We are proud to provide full-time employees at our San Bernardino Air Hub and throughout the region a minimum starting wage of $17 an hour," Flaningan said. "Depending on their shift, our full-time employees can earn up to $19.25 an hour and receive industry-leading benefits including healthcare from Day 1, 401(k) with 50% company match, and up to 20 weeks paid parental leave."

Amazon officials are continuously listening to concerns and looking at ways they can improve, he said, adding that the company provides competitive pay, comprehensive benefits and an "engaging, safe work experience."