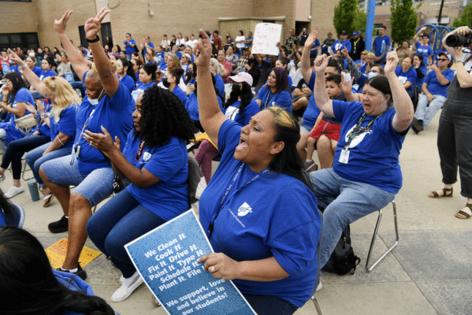 The minimum wage in Denver will increase to $17.29 per hour beginning January 1, an annual adjustment based on the Consumer Price Index.

Denver will be among several dozen cities nationwide with minimum wages over $17 per hour, city officials said in a news release. The minimum wage for tipped food and beverage workers will be $14.27 per hour provided they earn at least $3.02 in actual tips.

“At a time when inflation and rising costs are impacting working families everywhere, this increase in our minimum wage, which is based on the Consumer Price Index, will help those who need it most,” Mayor Michael B. Hancock said in the release. “We know this will put additional burdens on our local businesses, but this is an important tool to support vulnerable workers across the city.”

The increase comes from the city’s local minimum wage ordinance approved unanimously by Denver City Council in November of 2019.

“The law took effect Jan. 1, 2020 and called for three scheduled increases that took the local minimum wage from the statewide minimum of $11.10 in 2019 to Denver’s local minimum wage of $15.87 in 2022,” according to the release. “Beginning Jan. 1, 2023, the legislation requires annual increases based on the Consumer Price Index (CPI), to ensure that wages keep up with Denver’s actual cost of living.”

At-large Denver City Councilwoman Robin Kniech, said that, “CPI increases are used in the vast majority of state and local minimum wages across the country. They are designed to do just what this increase will for Denver workers: help them keep up with the cost of living rather than falling behind as prices increase.”

In July, Denver Public Schools announced that the district will begin paying paraprofessionals at least $20 per hour next month and that it plans to increase the minimum wage for all employees to that rate by the 2024-25 school year.