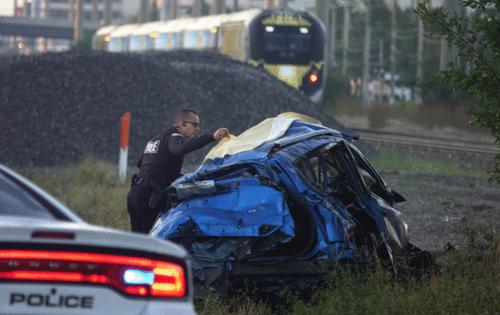 In a major initiative to cut down on deaths and injuries along Brightline’s rail corridor, the U.S. Government has allocated $25 million for safety improvements between Miami-Dade and Brevard counties, railroad and government officials announced Monday.

The money is helping to cover $45 million in measures that will include improvements at 328 roadway-railroad grade crossings and 33 miles of pedestrian protection features in Miami-Dade, Broward, Palm Beach, Martin, St. Lucie, Indian River and Brevard counties along the Florida East Coast Railway line, which is used by Brightline.

The safety measures, which will be installed throughout 2023, will become even more critical when the line opens a $2.7 billion, 170-mile extension between West Palm Beach and Orlando early next year. Construction is more than 80% complete, according to the company.

Since February, the U.S. Department of Transportation and the Federal Railroad Administration it oversees have focused on a rash of rail deaths in Florida, conducting meetings among rail operators and South Florida local government officials including law enforcement to pinpoint problem areas and to encourage public agencies to apply for millions in federal grant money.

The latest round of funding, which was jointly pursued last spring by the FDOT, Brightline and the Florida East Coast Railway, was announced Monday at the Brightline station in downtown Fort Lauderdale. U.S. Reps. Debbie Wasserman Schultz and Sheila Cherfilus-McCormick, both Democrats representing districts in Broward, and Rep. Mario Diaz Balart, a Republican from Miami-Dade, said they worked in concert to help deliver the money to South Florida.

The grant, from the U.S. DOT’s Rebuilding American Infrastructure with Sustainability and Equity (RAISE) program, drew rare bipartisan support from South Florida’s congressional delegation. Besides the three House members who appeared at the station, it has the backing of Reps. Frederica Wilson, Ted Deutch and Lois Frankel, as well as U.S. Sens. Rick Scott and Marco Rubio according to a company statement. Local municipalities and all of the region’s county metropolitan planning organizations, which help set transportation policy, also supported it.

“Brightline is a critical part of Florida’s transportation network and has significantly improved the lives of many Floridians through an easy and efficient method of travel through South Florida,” said Diaz-Balart.

“It is a huge private investment,” he added. “When we are looking at these kinds of funds it requires the appropriations committee to get it done. We don’t deal with partisan lines. We work together to get things done for Florida and for South Florida and this another example of what we can do when we work together as a team.”