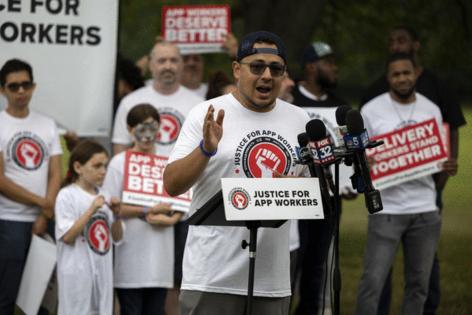 David Crane keeps a yellow legal notepad in his car, pages upon pages filled out with his thoughts on the concerns of thousands of other rideshare drivers like him, with demands that boil down to better wages, safer working conditions and union rights.

“We deserve what’s right. We deserve better pay for the amount of time that we spend away from home. We deserve to have livable wages, and we’re not receiving them,” Crane said.

At a news conference Sunday afternoon, Illinois rideshare drivers and delivery workers from Uber, Lyft, Grubhub and DoorDash announced that different local groups —which add up to 20,000 members — are joining in a national movement led by Justice for App Workers.

“This is a roller coaster of a job. Any day we go out there, we don’t know what we are going to face. We might be going out there and it might be a good day where earnings are solid and customers are pleasant,” said Lenny Sanchez, of JFAW and the Illinois Independent Drivers Guild.

“But at the same time, we’re always thinking about the potential of having a customer that’s unruly and unhappy and makes an unfair claim against us. And with an algorithm that is our boss, that sometimes means our position as a worker is terminated and our means to provide for our families are completely pulled from underneath us,” Sanchez said.

Sanchez spoke in front of a banner with the coalition’s logo: a pumped fist holding a cellphone, the word “justice” written in 11 different languages in a circle around it. JFAW originated sixth months ago in New York with 100,000 workers, and Sunday’s announcement marked the movement’s expansion into the Midwest.

“This is a movement that we’re trying to take national. We started with Chicago. We hope that the next step will be other cities, and we welcome everybody to join in, be a part of it,” said Adalgisa Payero-Diarra, of JFAW New York. “So, let’s just keep the movement and the momentum going.”

As Chicago rideshare and delivery drivers face rising gas prices, inflation and risks on the job, the app-based workers are fighting for six specific demands to be met by their companies: living wages, safer working environments, an end to unfair account deactivation, quality health care and mental health care benefits, access to bathrooms on the job and the right to form a union.

Desiree Gillespi stopped being a rideshare and delivery driver five months ago. She said that, among other things, she was exposed to constant sexual harassment from clients and that Uber did nothing but send her a generic message in response to her reports.

“It’s just really unfortunate that we give our all — we go out there just to try to make a living for our families — and we don’t get much in return,” Gillespi said. “So, I am proud to be part of the coalition for Justice for App Workers because we are much stronger together. We cannot do this alone. We have to unite and we have to unionize.”

“Hopefully we can get an Uber and Lyft to treat us better, as humans, because sometimes we feel like we’re not getting treated as humans,” Manny Levya, a full-time Uber driver and member of SOS Uber y Lyft, told the Tribune. “They don’t care about us whenever something happens to us, a lot of times instead of fighting for us, we actually get deactivated.”

The news conference was bookended by a day of rest and respite for app workers in Grove 10 of Schiller Park, with bouncy houses for children, food trucks for families and music.

“I like to tell people that this may be a simple job, but it’s not an easy job all the time. And I look at this as taking care of people for a living,” Crane said, looking out to the people gathered on a cloudy Sunday afternoon. “We should definitely be treated a lot better than we are being treated now.”