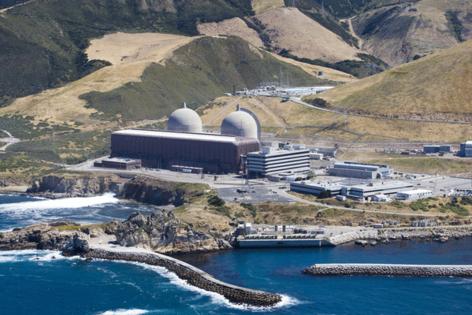 A last-minute proposal from Gov. Gavin Newsom could keep the Diablo Canyon nuclear plant open through 2035, a decade beyond its current closure date — in part by giving owner Pacific Gas & Electric Co. a $1.4-billion forgivable loan.

The proposal is part of draft legislative language distributed to state lawmakers late Thursday night. The bill, which has yet to be introduced in the Legislature, would also exempt the Diablo Canyon extension from the California Environmental Quality Act and several other environmental rules that nuclear opponents might otherwise use to challenge the extension.

Diablo Canyon is California's single largest power source. Officials are worried that without it, the state could have trouble keeping the lights on — and air conditioners running — during intense summer heat waves. Newsom has also suggested that keeping the plant open would help fight climate change because Diablo doesn't produce planet-warming pollution.

"Some would say it's the righteous and right climate decision," Newsom told The Times earlier this year.

The 2,250-megawatt power plant — which generated 6% of the state's electricity in 2021 — is nestled along the Central Coast south of Morro Bay. Its fate has been a subject of controversy for decades, with then-Gov. Jerry Brown railing against the facility's construction in the late 1970s amid a wave of anti-nuclear activism spurred by the Three Mile Island partial meltdown.

It's been six years since PG&E struck a deal to close Diablo by 2025, succumbing to public concerns that the plant — which sits near several seismic fault lines — could spread deadly radiation during an earthquake. The U.S. also has no long-term storage repository for spent fuel, meaning radioactive waste is piling up at nuclear plants across the country, including Diablo.

But since PG&E agreed to exit the atomic energy business, the growing urgency of the climate crisis — which has led to worsening wildfires, heat waves, storms and droughts — has led some environmentalists to reconsider nuclear-plant closures.

It's an especially pressing question in California, which has had trouble supplying enough power to keep the lights on during hot summer evenings after the sun goes down, when solar panels stop generating. Parts of the state suffered brief rolling blackouts over two nights in August 2020. There have been several close calls since then.

When the Biden administration announced earlier this year that it would give out $6 billion in federal funds to help rescue nuclear plants facing closure, Newsom said California would be "remiss not to put that on the table as an option."

But it's not yet clear whether PG&E will be eligible for the federal funds — hence the draft bill circulated by Newsom's office.