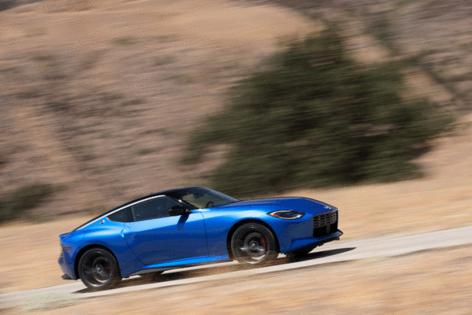 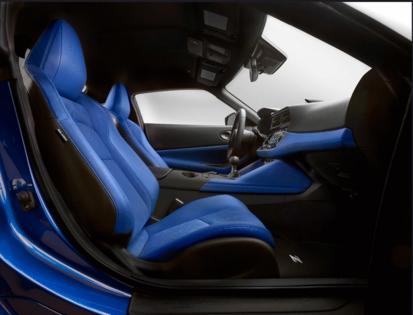 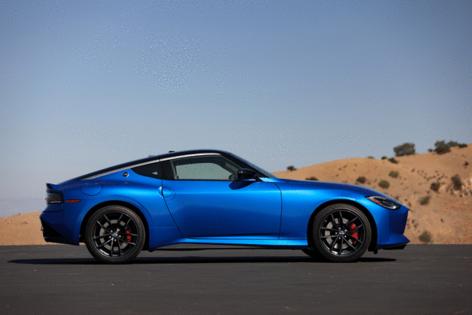 One of the first sports cars I rode shotgun in as a kid was the 1970 Datsun 240Z. On a race track. Red. Fat tires. Manual shifter. Inline 6-cylinder engine. Bubble headlights. Two-door fastback. Hood that went on forever. Ooooh, I loved that car. No generation of Z has measured up since.

The redesigned seventh-generation Z sitting in my driveway is a stunner. Perhaps because it’s inspired by the original ’70. Red. Fat tires. Manual shifter. V-6 engine. Bubble headlights. Two-door fastback. Long hood. Like Mustang returning to its design roots with the fifth-gen 2005 pony car, the Z updates the original 240Z design for the 21st century. Since photos of the sleek “Z Proto” concept car first appeared in 2020, anticipation has run high, and the production car doesn’t disappoint. When I drove it north to Lake Charlevoix for a weekend, it turned heads wherever it went.

“Oh, I would definitely take that over the Supra,” said one male admirer, referring to Z’s Toyota arch-enemy and its polarizing nose.

“THAT is a gorgeous car,” said a female pal.

“Cool, looks like the original 240Z,” said a racing buddy.

Walk around the sleek coupe and it’s apparent why Nissan decided to call it simply Z. This is a car in search of its roots. “The original 240Z was built to bring the joy and excitement of sports car ownership,” says Nissan’s media materials. “That spirit and heritage continue today.”

Though it sits on the same ol’ chassis as the last-gen, Z reaches back to the lean looks of its famous ancestor. The design is simple, purposeful. The bubble headlight theme is repeated in the door handles and fuel door.

Nissan Z is more than a pretty dress.

Below decks is a modern interior strapped to a rocket of an engine. The old nail 3.7-liter V-6 has been tossed for a glorious twin-turbo, 3.0-liter mill putting out 400 horses and 350 pound feet of torque. That’s a gain of 20% and 30% respectively. Mmmm, Z-esty.

The Federal Reserve building in Washington, D.C. is encased in rock. It’s Creole marble from Georgia. The stone is considered relatively soft, which makes it easier to cut. The marble strikes a majestic image of ...Read More

A new Deloitte poll found more than a third of shoppers �...Read More