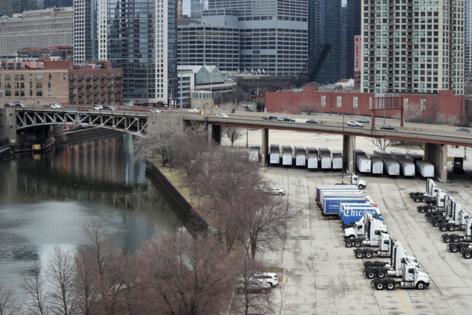 Bally’s filed its application with the Illinois Gaming Board on Wednesday, taking a major step in the process to build Chicago’s first casino and the flagship property for its fast-growing company.

The application was posted on the gaming board website Thursday morning.

The clock is now running for the publicly traded Rhode Island-based company to win license approval from the state, finalize its proposal with the city’s planning department and get its casino opened on an ambitious timeline.

If all goes well, Chicago gamblers could be splitting aces and pulling slot levers in temporary quarters by next summer, but several hurdles remain.

The Bally’s proposal to build a $1.74 billion casino complex in River West is expected to generate $200 million in annual tax revenue for the city, transform a 30-acre industrial site into a bustling entertainment destination and send the Chicago Tribune packing from its Freedom Center printing plant along the Chicago River.

While the permanent casino is not expected to open before 2026, Bally’s plans to launch a temporary casino at Medinah Temple by June 2023. That may require an accelerated process at the gaming board.

The state allows casinos to operate in a temporary facility for up to two years, with the ability to apply for an additional 12-month extension, before opening a permanent location. It took the most recent licensee — Hard Rock Casino Rockford — 16 months to get preliminary approval from the board and two years to open a temporary casino.

Beyond logistical issues, there has been some pushback to using the 110-year-old Medinah Temple, which was designated a Chicago landmark in 2001, as a temporary casino.

Preservation Futures, a Chicago-based historic preservation firm, sent a letter to the Commission on Chicago Landmarks asking it to reject the adaptive reuse of Medinah Temple as “inappropriate” and not “harmonious” with the public benefit of preservation.

On Aug. 5, the commission issued conditional approval for the plan, saying it “would not have an adverse effect” on the landmark property.