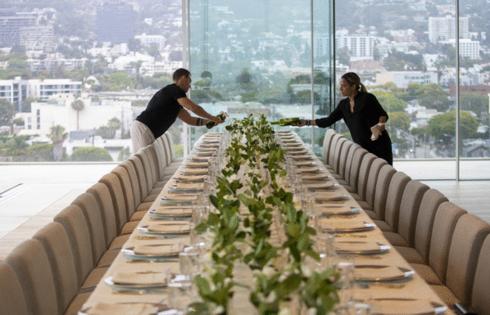 Two dozen of L.A.’s top real estate agents — the sunglasses-indoors kind who regularly appear on reality television — were tended to by a cadre of young women in identical cream outfits, hired for the evening to serve as “personal concierges.” Eight hundred gardenias were flown in from a San Francisco Bay Area flower farm, separated into individual vases and spaced exactly four inches apart on a long tablecloth-draped table. There was welcome Champagne and caviar blinis; a live singer in a glittery siren-red gown; and filet mignon with “caramelized heirloom truffle.”

Up for grabs: the city’s latest showstopping eight-figure penthouse, a decade in the making and finally for sale for $50 million off-market at a time when luxury condos in L.A. are more coveted than ever. If it sells at that price, it’ll break the county’s all-time condo sales record of $35 million, for a Century City penthouse that Candy Spelling bought in 2010 when she was looking to downsize. (Although, with another, even more expensive condo set to be listed this week, any new record might not stand for long.)

Across the hall, taking up the other half of the top floor of the new 8899 Beverly building in West Hollywood, is a second penthouse that will be available in the fall — or immediately, for a buyer willing to part with around $100 million for the pair. East and West were designed to be combinable into one uber-unit, which the developers say would make it the largest single-story penthouse in the world at nearly 20,000 square feet, including a wraparound terrace.

A sizable marketing machine is now spinning up to get a blockbuster deal done soon, before looming economic concerns threaten to damp rich-buyer behavior. Developer Townscape Partners has been stoking anticipation for the penthouse for years and is looking to capitalize on L.A.’s scorching luxury condo market, which continues to rack up enormous sales even as real estate overall has started to cool.

The East penthouse is a steel-and-glass enclosure on the 10th floor with spectacular in-your-face views, nearly 14-foot-high ceilings, a private elevator, and massive sliding-glass windows and doors. A New York staging company was hired to outfit the space with luxe furnishings and artwork totaling “in the six figures,” one of the firm’s partners said, so a buyer could move right in if decorative tastes align.

Historically, sprawling Los Angeles lagged behind other international cities when it came to expensive vertical living. If you were rich and looking to put down roots in the L.A. area, you wanted a mega-mansion in Malibu, Beverly Hills, Bel-Air or a similarly ritzy ZIP Code; paying many millions of dollars for shared walls and communal spaces was not the Southern California dream.

Buyers doubled down on stand-alone homes during the early stages of the pandemic, as airy indoor spaces, big backyards and ample distance from neighbors became even more important.

Months of restrictions and isolation led to a significant shift in mentality toward the end of 2020, real estate brokers said. Suddenly community, convenience and a carefree jet-setting lifestyle — aided by flexible remote-work policies and looser travel rules — were in high demand among the rich, and many gravitated toward the turnkey ease afforded by over-the-top condo buildings in desirable, centrally located neighborhoods.

“If you’re talking about the ultra-luxury market — like over $5 million, $10 million — what you’re seeing is a buyer that collects residences almost like art,” said Fredrik Eklund, one of the listing agents handling sales at 8899 Beverly. “They own maybe three or four of them in the best cities. They want to come and push a button and call the concierge and then they want to leave. And that’s a great life.”