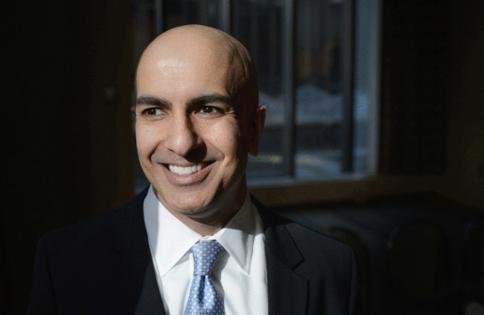 Neel Kashkari welcomed the first better-than-expected inflation report in many months on Wednesday, but said it did not change his view on the need for more aggressive interest rate hikes even if it means triggering a recession.

"This is just the first hint that maybe inflation is starting to move in the right direction," the president of the Federal Reserve Bank of Minneapolis said on a panel at the Aspen Institute on Wednesday afternoon, just hours after new data was released showing that inflation had cooled a bit in July.

"But it doesn't change my path," he added.

And that path, he revealed, is the most aggressive among his fellow participants on the Fed's rate-setting committee, a striking reversal for a man who for many years was the most resistant to raising rates at the Fed.

During Wednesday's panel discussion, Kashkari said he had recommended in June that the Fed hike rates to 3.9% by the end of this year and to 4.4% by the end of 2023, which was the highest projection among committee members.

He said he hasn't seen any data that has led him to change his stance since then. Kashkari does not have a vote on the committee this year, but he will next year.

Declining gas prices led to a lower-than-expected consumer price index reading in July, with price increases moderating a bit and rising 8.5% over the year compared to a recent high of 9.1% in June. But overall inflation still remains very high, with prices for food and housing still going up.

Kashkari said he was happy to see the lower-than-expected inflation data on Wednesday, but said the Fed still had a long journey ahead of it that will take at least a couple of years before it gets inflation back down to the target of 2%.

"We are a long way away from saying we're anywhere close to declaring victory," he said.

Still, the markets seem to think that the Fed will begin easing rates in coming months, and stocks rallied on Wednesday as investors hoped that the softer inflation report would spur the Fed to moderate its future rate increases.