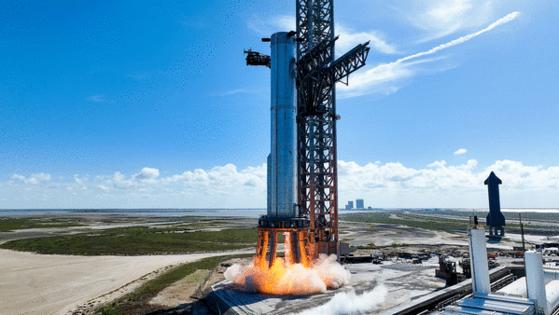 An orbital launch of SpaceX’s new massive rocket is getting closer to reality with the company firing up its new engines for launch pad hot fires of both a super heavy booster and Starship prototype.

The company performed the two separate hot fires at its Boca Chica, Texas site Starbase on Monday posting images and video to its social media of the dialed-back tests. In mid-July, the Super Heavy Booster 7, spinning up all 33 of its Raptor engines, suffered damage after a fireball exploded during a test, which required repairs.

This time, the company chose to light up just a single Raptor engine during a static fire on the booster sitting on its orbital launch pad while also performing a separate static fire test of only two Raptor engines of the Starship 24 prototype.

The booster is designed to be topped with the Starship so that when combined, they stand 395 feet tall. When it lifts off, the orbital Starship and Super Heavy would become most powerful rocket to ever launch from the Earth, generating more than 16 million pounds of thrust. That nearly doubles the power of NASA’s planned Artemis flights and more than doubles those of the Apollo missions.

Starship 24, the 24th prototype of the next-generation rocket, rolled out to the launch pad more than a month ago in anticipation of the company’s first orbital test flight. Super Heavy Booster 7 has been back and forth from the launch pad to the on-site factory several times since March, including for repairs from the July incident that was caught on video by NASASpaceflight.com.

The company still has more regulatory approvals needed before it can attempt a launch, but earlier this year was able to move forward after the Federal Aviation Administration released the results of an environmental assessment, which found there would be no significant impact as long as SpaceX followed a series of proposed mitigation efforts at the southeast Texas launch site.

SpaceX has stated it prefers to keep Starship test flights in Texas, but is also building out launch facilities for the next-gen rocket at Kennedy Space Center, where it launches its current stable of Falcon 9 and Falcon Heavy rockets.

To date, the company has flown prototype versions of Starship without the booster to about 6 miles altitude, and attempted landings back in Texas, sometimes with fiery results. Those used only three or fewer of the new, powerful Raptor engines.

The plan for the next test flight, though, is to launch the stacked version of Starship and Super Heavy, have them separate, return the booster to land on a SpaceX vessel 20 miles offshore in the Gulf of Mexico while Starship achieves orbit for least one trip around the Earth and then lands in the Pacific Ocean.

Immediate plans for Starship are for Starlink satellite delivery to add to the company’s growing constellation of internet satellites, as well as to develop a version to assist NASA in getting humans back on the surface of the moon by 2025. Also upcoming is a tourist flight to orbit the moon funded by a Japanese fashion tycoon who’s taking along several artists.

WASHINGTON — California gasoline prices are soaring again — up more than a dollar over the last month — and the latest big congressional idea for relief involves creating an emergency oil supply that Washington would...Read More

Friendswood, Texas, is the type of community that one might think of as a “best case scenario” when it comes to recovering from a disaster.

It is a small tight-knit town with well-resourced residents and a ...Read More

LONDON — A little over a decade ago, Four Seasons Health Care was among the largest long-term care home companies in Britain, operating 500 sites with 20,000 residents and more than 60 specialist centers. Domestic and ...Read More