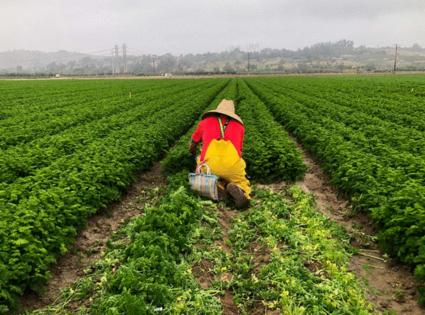 FRESNO, Calif. — California labor officials have issued civil penalties to an employer that fired a group of farmworkers it misclassified as independent contractors; labor experts say the landmark decision could have a “profound” impact on the agriculture industry.

The July 28 decision by the Agricultural Labor Relations Board resulted from a complaint filed by Marisol Jimenez, a farmworker on California’s Central Coast who was fired in 2017 alongside five other workers after raising concerns about not receiving proper paystubs with their weekly paychecks.

The decision marks the first time the ALRB has recommended civil penalties for willful misclassification of farmworkers as independent contractors instead of employees, according to an ALRB news release on the decision.

“Misclassifying employees as independent contractors, at the very least, implicitly, conveys to the employees they have no labor rights, and therefore contains an inherent chilling effect on those employees’ free exercise of protected rights,” according to the ARLB’s decision.

The agricultural industry and farm labor contractors should “take notice” of the decision, said Ana Padilla, executive director of the UC Merced Community and Labor Center.

The decision sets “a very important, and I would even say, profound, precedent around the issue of misclassification in the ag industry,” Padilla said during an interview with The Bee on Tuesday.

In addition to the civil penalties, Cinagro Farms was also ordered to offer reinstatement to the six workers that were fired and compensate them for financial losses resulting from their unlawful termination. In addition, the company must end any further retaliation against workers exercising their protected actions, cease misclassifying workers, and comply with other technical reporting and notification requirements.

The total amount of penalties is set to be confirmed at a future date, and parties have 30 days to appeal the board’s decision. Padilla said it’s important that as a precedent-setting case, the fines act as a deterrent to especially farm labor contractors, from misclassifying workers, but acknowledges, however, that large multinational corporations might not feel the impact of the penalties.

However, Rob Roy, president and general counsel for Ventura County Agricultural Association and the attorney representing Cinagro Farms, in this case, said the decision is “concerning” for other reasons in an interview with The Bee on Wednesday.