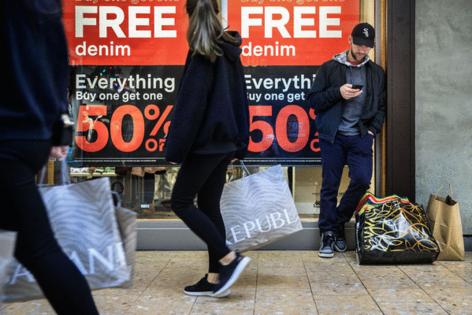 Only a minority of economists correctly predicted that the U.S. economy would contract last quarter. The number who expect it to keep shrinking in the current period is even smaller.

Gross domestic product declined for a second straight quarter in the April-June period, the government reported last week, cueing a debate about whether the U.S. is in a recession. The 0.9% decline compared with a median forecast for growth of 0.4% in Bloomberg’s survey of economists.

For the current period, economists are more upbeat — the median expectation is for growth of 1.7% — and there are fewer negative numbers in the survey, with only five out of 55 participants anticipating another contraction.

Still, the pessimists were right last time. Here’s why the five gloomiest forecasters in Bloomberg’s survey expect the U.S. economy to keep shrinking.

“The compositional mix is bothering us,” says Michael Gapen, the newly appointed U.S. chief economist at Bank of America. He expects a decline in GDP of 0.5% this quarter, followed by further contractions through early 2023.

The shock to real income that consumers have experienced, as inflation raises the cost of non-discretionary items such as food and energy, is weighing on confidence, Gapen says.

“Of course we are in a recession,” says John Dunham, a managing partner at research firm John Dunham & Associates. He expects a “shallow recession” to continue until at least next year, with a variety of factors sapping momentum from the U.S. economy.

“Inflation is likely to continue at high levels well into the foreseeable future, and could get much worse depending on international relations, U.S. fiscal and monetary policies, and regulatory policy which appears to be getting far worse,” Dunham says.

Few industries are as sensitive to interest rate changes as housing. As borrowing costs rise, purchasing power declines. That creates a drag on accelerating home prices, which can stimulate more owners to put their homes ...Read More

Appearing on a panel sponsored by Johns Hopkins University to talk about bitcoin and other cryptocurrencies, Mashinsky, the chief executive of the crypto banking ...Read More

Amazon.com Inc., Oracle Corp. and other data providers pressed by a group of U.S. lawmakers about how they sell mobile phone location data offered assurances that the information couldn’t be used to track individuals ...Read More