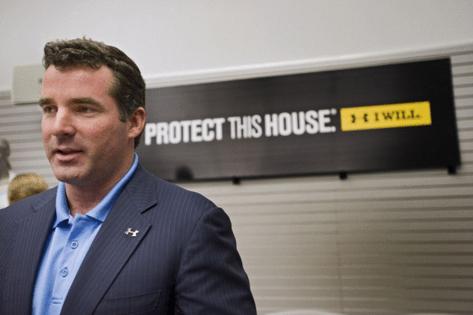 BALTIMORE — Under Armour founder Kevin Plank made a rare public appearance for the company Wednesday to say the search for a new CEO is progressing, with a decision expected before the end of the year.

“The board and I are focused on our search for a permanent CEO, a proven leader capable of amplifying our existing strategy in a now large and mature public company, a professional who can technically do the job while simplifying the definition of success in that job,” said Plank, the company’s executive chairman and brand chief.

Long the face of the company until recent years, Plank made the comments while addressing analysts Wednesday during a quarterly earnings conference call. He said the next CEO will be tasked with taking care of the brand while making the most of Under Amour’s numerous athlete relationships and partnerships.

In his first 60 days as interim CEO and president, Colin Browne, the company’s chief operating officer, has “done an outstanding job stepping in to manage our business,” Plank said during the call.

That’s earned him a place in the pool of CEO candidates pulled from proven leaders across various industries being reviewed by Under Armour director Karen W. Katz, Plank said.

Plank also announced plans to reallocate and reposition Under Armour’s marketing budget of $600 million, which he said the company has failed to optimize, as a way to drive brand growth.

And he said the company is doubling down on its mission of offering innovative sports apparel. The brand plans to launch a new footwear platform this fall, starting with a training shoe, he said, that can “change the athletic footwear landscape” and can “become a signature item for our current $1.5 billion footwear business.”

Plank addressed analysts after the company reported financial results for the first quarter of the company’s new fiscal year that ended June 30. Under Armour earned $8 million, meeting earnings forecasts for its first fiscal quarter and saying its brand remains strong in a difficult environment.