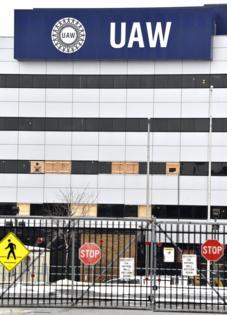 Instituting direct elections of United Auto Workers' international officials is leading some members to step up and challenge President Ray Curry to the union's top role, even from within Solidarity House.

Passage last year of the "one member, one vote" system by a referendum vote of the membership was brought on by a years-long corruption scandal, implicating 17 people, including two former UAW presidents. It's setting up a historic leadership selection process ahead of next year's critical contract negotiations with the Detroit Three automakers as their transition to electrification increasingly affects shop floors and as the union covers an increasingly diverse swath of members.

Now some of those members feel empowered by the opportunity for the rank-and-file to choose their leaders instead of the locally elected delegates who've historically voted on the leaders at a Constitutional Convention held every four years. The former system, critics say, helped keep the candidates put forth by the Reuther or Administrative Caucus in power for more than 70 years. Some members say new voices are needed to restore trust in the union and offer transparency.

The Detroit News left an inquiry with the court-appointed UAW monitor regarding how many candidates have submitted declaration forms with the intention to run for office. Curry announced in March his intention to run for election for a full term after being appointed to the office following the retirement of Rory Gamble last year.

Tossing their hat into the ring are members like Shawn Fain, an international UAW administrative representative who works in the Stellantis Department. He announced his candidacy on Thursday on Facebook. The 28-year UAW member started at the automaker's casting plant in Kokomo, Indiana, as an electrician and joined the international's staff in 2012 after serving in the leadership of Local 1166. He is seeking endorsement from the dissident Unite All Workers for Democracy Caucus, which hasn't not yet endorsed a slate.

Over his career, Fain, 53, of Shelby Township says he believes the union can do better to serve its members and has seen and experienced pushback when members seek to be a voice for the membership.

"When I came on staff at Solidarity House, I was really proud," he said. "I made it to the pinnacle of the union and thought, 'This is going to be really great.' I didn't realize at that point how that was going to be. They don't fight for our members. They're complacent."

Fain lamented how autoworkers hired after 2007 no longer receive pension and retirement health-care benefits unlike the workers hired before them. With the automakers having recovered from the recession and earning billions of dollars, Fain, a member of the national negotiation team in 2009 and 2011 for skilled trades and then in 2015 and 2019 as an international representative, feels the union should've pushed for more, particularly when it comes to the eight years it takes for full-time autoworkers to reach top pay.

The final straw for Fain, he said, was when the union recently bettered the pensions of its own employees hired after 2008 to be the same as the pensions as those hired before 2008.

"They are not being transparent," he said. "We just have mixed-up priorities. To me, the priorities should be focused more on the members."

It was 1986, and the incoming freshman, a self-described TV addict, assumed the course would teach Latino teens ...Read More