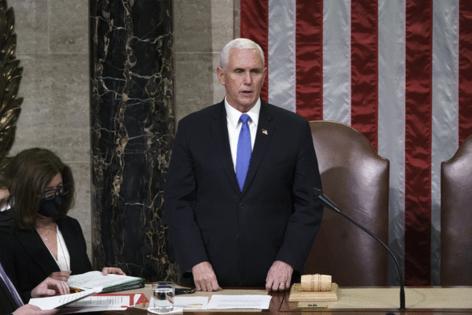 In May, Elon Musk went on the warpath against the investment model known by the initials ESG, short for "environmental, social and governance" principles.

"ESG is a scam," Musk, the chief executive of electric-car maker Tesla, groused in a tweet. "It has been weaponized by phony social justice warriors."

Musk was irked that Tesla had been dropped from a Standard & Poor's ESG index while oil company Exxon Mobil remained. But his complaint tied in neatly with a campaign being waged by political conservatives against ESG, or, as they sometimes describe it, "woke capitalism."

Red states have been implementing policies aimed at taking business away from investment managers whose strategies ostensibly promote environmental goals or social activism — say by shunning investments in fossil fuel or firearms companies or in companies with questionable social practices.

Former Vice President Mike Pence placed the battle against ESG front and center in his quest for the GOP presidential nomination in 2024. During a speech in Houston in May, Pence attacked the Biden administration for advancing "capricious new ESG regulations that allow left-wing radicals to destroy American energy producers from within."

Pence's words surely fell on welcoming ears in Houston, since ESG investing commonly targets the oil and gas industry and the fossil fuel economy. For example, the American Legislative Exchange Council, a right-wing organization partially funded by the Koch network, which derives much of its wealth from fossil fuels, has promoted a model anti-ESG law.

Texas State Comptroller Glenn Hegar has already begun compiling a list of boycotting firms by asking them to disclose their policies on global warming.

Goldman Sachs and U.S. Bancorp declined my request for comment. BlackRock hasn't commented publicly. JPMorgan told me it hasn't yet responded to Moore; the deadline for responding is July 10. The other two didn't reply.