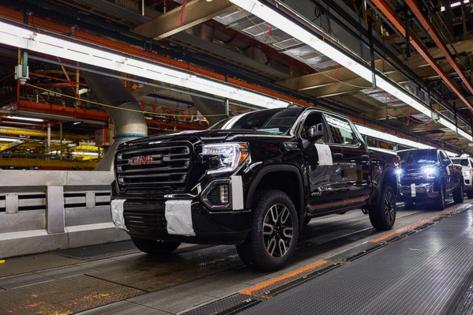 General Motors Co. on Friday reported a 15% year-over-year decline in its second quarter sales when the automaker still remained supply constrained, but the automaker also still expects to deliver $9.6 billion to $11.2 billion in net income this year, according to a Friday filing with the Securities and Exchange Commission.

The automaker expects its second-quarter net income to come in between $1.6 and $1.9 billion, according to the filing. GM made $2.8 billion in the second quarter of 2021 and $10 billion for the year. Second-quarter earnings will be released at the end of the month.

GM said its vehicle wholesale volumes were affected in the second quarter of 2022 by supply chain disruptions, including delayed semiconductor shipments. The automaker totaled about 95,000 vehicles in its inventory awaiting certain parts as of June 30. Most of the vehicles were built in June.

In the SEC filing, GM wrote that it expects "substantially all of these vehicles will be completed and sold to dealers before the end of 2022."

GM dealers sold 582,401 vehicles in the U.S. from April to June. GM's sales and market share increased sequentially for the third consecutive quarter. The automaker noted its commercial, government and daily rental deliveries were up a combined 29%. Sales to commercial and government customers were 73% of the fleet sales mix.

All of GM's four brands saw year-over-year sales decreases. Buick dropped 56%. Cadillac was down 7%. Chevrolet dropped 11%. And GMC was down 14%.

The top-selling Chevrolet Silverado reportedly had 143,032 sales in the quarter, down 13% year over year. Back on the market after a mass recall and months-long stop sale, the Chevrolet Bolt EV and Bolt EUV had nearly 7,000 sales, which still did not hit last year's more than 11,200.

Production of Cadillac's first electric vehicle, the Lyriq, is accelerating, with initial deliveries in process, GM said. The automaker expects to gradually increase production of both the Lyriq and the Hummer in the second half of 2022.