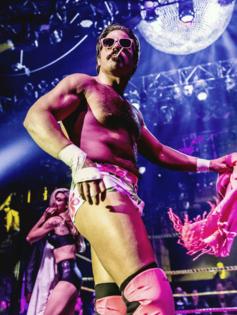 Joseph Meehan, known in the wrestling world as Joey Ryan, worked for the theme park for about three months in a probationary status until Disneyland declined to hire him as a full-time employee, according to Disneyland officials.

"Mr. Meehan is no longer employed by us," a Disneyland spokesperson said, declining to elaborate on why he was not given a permanent job and whether the harassment allegations played a role in that decision.

The theme park's screening process for potential employees includes a criminal background check, but Disneyland officials said that check did not alert them about the harassment accusations against Meehan, under his stage name, that appeared in social media posts, wrestling fan sites and sports blogs in recent years.

Several attempts to reach Meehan through his attorney and through email were unsuccessful.

Meehan worked as a professional wrestler from 2000 until as recently as 2019, starting as a founding member of the Pro Wrestling Guerrilla, making appearances in matches promoted by World Wrestling Entertainment and being featured in the National Wrestling Alliance. His wrestling persona was a macho, mustachioed playboy who wore Speedos and sunglasses.

Almost all of those lawsuits were either dismissed or not pursued by Meehan, according to court records. In one case, a judge threw out Meehan's suit, citing an anti-SLAPP statue, which can be used to prevent powerful entities from intimidating critics for practicing free speech. Meehan's attorney, Joe Utzurrum, said a federal court case filed by his client is pending.

Meehan's short tenure at Disneyland comes as the park works to retrain and hire enough people to return to the full staffing of about 32,000 employees employed before the pandemic. The Disneyland resort, which now employs about 30,000 workers, is expected to reach full capacity levels this summer as demand for travel rebounds now that COVID-19 health restrictions have been lifted and masks are no longer required in the park.