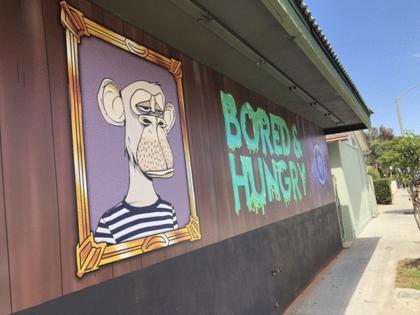 When Bored & Hungry first opened in Long Beach in April, the burger joint didn't just embrace the aesthetics of crypto culture. It was all-in on the digital money part too.

Sure, meme-y references to rockets and bulls dotted the walls, and Bored Apes — those cartoon monkeys that celebrities such as Paris Hilton and Post Malone have touted as six-figure investments — covered the cups and trays. But customers were also offered the option to pay for their meals in cryptocurrency. The restaurant was putting its bitcoin where its mouth was, so to speak.

Not even three months later, in the midst of a crypto crash that has some investors looking for the door, that is no longer the case.

During a lull in the lunch rush one recent afternoon, as a cashier stamped paper bags with the fast-food spot's logo, twin menus hanging over his head — listing Bored & Hungry's meat-based and vegan options, respectively — showed prices only in old-fashioned U.S. dollars.

Missing: any mention of ethereum or apecoin, the two currencies the popup boasted it would make history by accepting as payment.

But an employee who declined to give their name said that the store wasn't accepting crypto payments. "Not today — I don't know," they said, declining to clarify how long ago the store stopped accepting crypto or whether that option will eventually return.

With both coins down more than 60% since early April and undergoing double-digit intra-day swings, it would be understandable for any business to be reluctant to accept them in lieu of dollars. But utility may also be a factor. At the restaurant's grand opening, a staffer told The Times that the crypto payments were unwieldy and going largely ignored by customers.

Nearly three months later, it was hard to find a patron who cared much one way or the other about the restaurant's fidelity to the crypto cause.

Lowe’s store employees will soon see bonuses in their paychecks.

The home improvement retailer is giving $55 million in bonuses to its hourly workers in stores during this time of high inflation, Lowe’s CEO Marvin ...Read More